Enclosure in Israel and Palestine 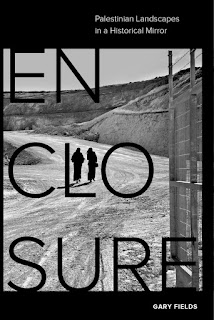 In developments close to home, the latest issue of the New York Review of Books has a review by Raja Shehadeh of Gary Fields's Enclosure: Palestinian Landscapes in a Historical Mirror (U. California Press, 2017). Some excerpts:


Starting in the mid-nineteenth century, a series of legal developments in the Ottoman Empire—which ruled Palestine until 1917—had enabled the growth of... large land holdings. They included the promulgation of the Ottoman Land Code of 1858, which attempted to eliminate the musha system, whereby land was held in common, and required that the cultivator-turned-owner register his land with Treasury officials.

The legal processes the Ottomans had begun were continued in the years after the end of their rule—first by the British military occupation of Palestine from 1917 to 1922, and then when the League of Nations granted the British a mandate over Palestine from 1922 to 1948. During both periods, the British continued to revise the land laws with a view to making the land more marketable and facilitating its sale to the Zionists. Among the British figures whose ideas provided the foundation for British land policy in Palestine was Sir Ernest Dowson, who believed that what the Palestinian fellah, or peasant, needed was “enclosure and partition of the common fields.”

In his book..., Gary Fields defines enclosure as “a practice resulting in the transfer of land from one group of people to another and the establishment of exclusionary spaces on territorial landscapes.” Dowson was intent on creating blocks of property that could be surveyed and registered with the Mandate Land Authority. Mandate authorities also sought to repeal the musha system. British officials were convinced that the enclosure of common land, which had already been implemented in England, had brought about “improvement” and “progress,” and they sought to replicate it in Palestine.

This British policy represented a victory for the Zionist movement. It made it possible for more Palestinian land to be sold to Zionist Jews.

The story of the transformation of the land in Palestine/Israel from the Ottoman period to the present takes up much of Fields’s book. But he tells it in a larger setting, tracing the idea of “enclosure” through England and North America before arriving at his discussion of the Palestinian landscape. What has happened there, he argues, belongs to a “lineage of dispossession” that can be followed back “to the practice of overturning systems of rights to land stemming from the enclosures in early modern England.” He describes at length how maps, property law, and landscape architecture were enlisted by modernizers from the seventeenth century onward in the Zionist practices in the Occupied Palestinian Territories to “gain control of land from existing landholders and remake life on the landscape consistent with their modernizing aims.”

I believe, based on my research on forest law and water law in Mandate Palestine, that the relationships between modernization, common and private property, colonial rule, and Zionism were considerably more complex than what Fields seems to argue, but I'll have to take a look at his new book.
Posted by David Schorr at 7:00 AM