Historical analysis in environmental law IV: What is to be done? - The commons, forest law, and police

One obvious place to look is to the history of that most well-worn of metaphors for environmental problems—the commons. As is well known by now, the actual medieval and early modern European commons caricatured in Garrett Hardin's parable of the tragedy of the commons were not the rule-free disaster zones he depicted, but rather highly regulated sites of interaction between humans and nature. Environmental historians have studied the laws governing the woodland and pasture commons, though not necessarily in the framework of 'environmental law' or with an eye to the type of questions a lawyer might ask of the sources. In particular, historians of environmental law might want to investigate broad issues such as the conceptions of law, justice, right, and property reflected in the commons regulations, as well as narrower ones such as the types of rules, standards, adjudicatory procedures, and remedies applied to various forms of environmental conflicts and their possible influence on later legal rules.

For instance, the principle of 'necessary use'—'that the actions of others should not deprive one of the basic materials needed to sustain one’s enterprise'—was apparently ubiquitous in early modern German commons by-laws, as it was in the rules governing water allocation in the nineteenth century western United States. It is also arguably the motivating principle behind the feasibility standard so pervasive in modern environmental regulation, which requires a polluter to use the best available technology only to the extent it is economically feasible. While a theorist might use this commonality to support a normative or positive argument about property in natural resources or pollution regulation, a historian might profitably search for the common roots of these norms or the paths through which they travelled in time and space, and the ways people justified or criticized them over time. 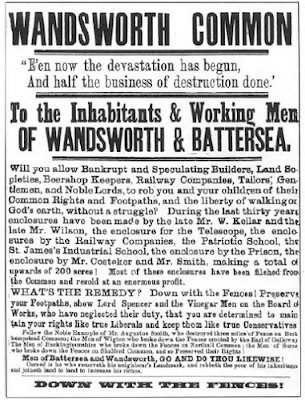 Moreover, legal fights against enclosure of the commons were clearly a precursor of more recent legal protections for open spaces, an alternative source to the commonly accepted stories about the Romantic and preservationist roots of this area of law, and one with a more socially-oriented tint. Investigation of the commons preservation movement and anti-enclosure movements in general are likely to yield insights into the political valence of some of the historical building blocks of environmental preservation law.

A related field demanding study is forest law. It is practically a commonplace among environmental historians that the concept of sustainability, so central to contemporary environmental law, originated in early modern forest management, and historians have shown that intensive forest regulation in Europe goes back to the medieval period. Environmental historian Richard Grove has made the connection between colonial forest management and concerns over climate change, and my own work has connected this concern to colonial forest regulation. E.P. Thompson's Whigs and Hunters highlighted the way early modern English forest law was both a tool of enclosure on behalf of landed elites and a site of resistance for commoners, and similar points have been made about English law in the medieval period. Other works have examined the historic interplay of private, common, and state property in forests and varying conceptions of conservation that were expressed in their regulation. These are all themes that continue to resonate in modern environmental debates. Further research might shed light on how forest law variously worked to preserve forests or facilitate their destruction, as well as on how this regulatory field influenced other areas of environmental law, including modern debates over the commons and enclosure.

Both these bodies of law are connected to a third, broad one (though some would deny it the distinction of being considered 'law'): so-called 'police' regulation. This flexible and capacious form of regulation, justified in terms of its promotion of good government and the common welfare, has had many points of contact with environmental issues since early modern times, through its protections for public health and safety and rules for management of natural resources.

In the next post, I'll give my take on Markus Dubber's attack on police regulation, and discuss further places to look for the history of environmental law.
Posted by David Schorr at 7:00 AM