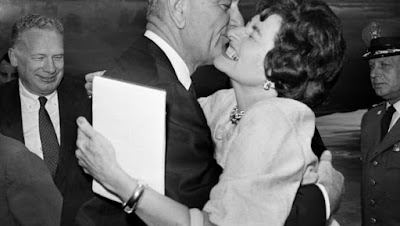 A recent issue of Federal History has an article by Nancy Germano, "Negotiating for the Environment: LBJ's Contributions to the Environmental Movement". From the article:


Environmental historian Martin V. Melosi refers to the Johnson administration as "a transitional force in the evolution from old-style conservation to modern environmentalism." This article presents evidence in support of Melosi's statement by showing that the Johnson presidency, typically associated with civil rights, the War on Poverty, and the Vietnam conflict, also created an environmental legacy. In addition to a record number of federal laws directed at protection of natural resources, Johnson's rhetoric and actions set the stage for American environmentalism. He, along with Lady Bird Johnson, initiated new conversations and approaches for natural resource protection and shaped environmental advocacy for the nation. In the process, Johnson generated an enduring conviction that environmentalism and individualism-the individual's claimed freedoms and property rights-could thrive hand-in-hand.

This article explores two legislative campaigns during the Johnson administration-urban beautification and protection of wild and scenic rivers-that exemplified the president's stance on natural resource conservation. These campaigns demonstrated the priorities of environmental "restoration," cleanup, and stewardship later adopted by the environmental movement. By generating public participation in environmental programs and fiercely negotiating the possible outcomes, Johnson's approach and recommended strategies prefigured the work of environmental activists.