This Day in Water History recently posted the following:

December 18, 1913: Municipal Journal article—To Prevent Fox River Pollution. “Geneva, Ill.-Acting under authority conferred at the last session of the legislature, the State Rivers and Lakes Commission has ordered officials of the cities of Batavia, Aurora, Geneva, Elgin and St. Charles to take immediate steps to prevent the pollution of Fox river by sewage and factory wastes. The five cities were given until April 7, 1914, to prepare plans and specifications for filtration or sewage disposal plants or otherwise prepare to discontinue the emptying of sewage into the river. The Fox river cases are the first of the sort to be acted upon by the commission. Similar action will be taken in numerous other cities located along Illinois rivers or lakes if complaints are made and substantiated. Lake Forest and other North Shore cities that have complained of lake water pollution by factories are expected to take their grievances to the commission. Witnesses before the commission testified that during low water periods the Fox river was polluted to such an extent as to he a serious menace to the health of 200,000 inhabitants of the Fox river valley. It was also shown that thousands of tons of ice were taken from the river every year and sold in these cities and in Chicago. Another objection to the emptying of sewage into the river was the fact that fish were unable to survive.”

Commentary: River commissions in several states were beginning to take action against the grossest pollution problems in the early part of the 20th century. 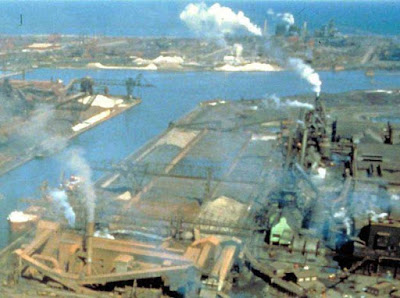 For more on regulation of water pollution in the Great Lakes see here and here.
Posted by David Schorr at 10:33 PM