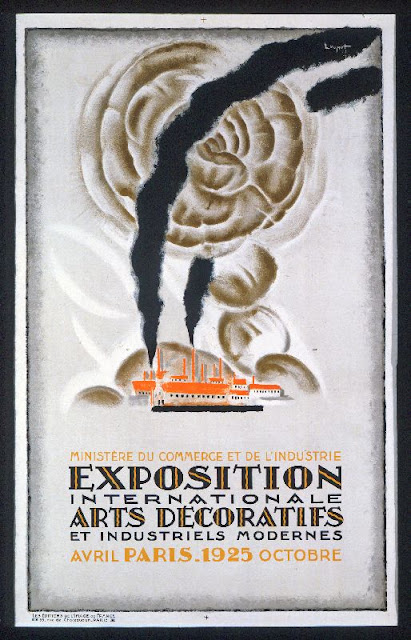 Following Part III of this series, featuring the French Impressionists and Oscar Wilde, we move on to the twentieth century.

In the first half of the twentieth century, air pollution seems to take on a progressively darker cast, both literally and figuratively. While it is difficult to read the pollution in many posters of the interwar era, such as one for the 1925 Paris Exposition Internationale des Arts Décoratifs (above), as anything but a symbol of progress, in the works of the German Expressionists such as George Grosz and Franz Marie Jansen (right), pollution often seems an inseparable part of their generally bleak world view.
Beyond the cultural and aesthetic, American art in this period also seems to begin to engage with pollution as a political issue, and thus potentially a legal one. An early but suggestive understanding of pollution is offered by the symbolist Elihu Vedder’s mural Corrupt Legislation (below) created for the new Library of Congress building around 1898. Art historian Richard Murray explains: 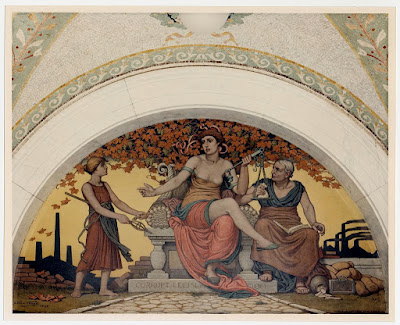 A plaintive figure with an empty distaff and spindle and backed by idle factories is waved away in favor of the bribe . . . . [I]ndustry churns out the smoke of prosperity behind the figure of Corrupting Wealth, who presides over bags of money and a strongbox as well as an overturned voting urn: “In his lap he holds the book of law, which he is skilled to pervert to his own ends.”


While in Murray’s view pollution may be identified with prosperity, it would seem that the smoke is also the font of corruption; the grease on the wheels of industry greases also the palms of the legislator.

And a yet more critical reading is also possible. The smoke belching from the chimneys of Corrupting Wealth may be not only the source of that wealth and corruption, but its result. Might the corrupting figure be bribing the legislature precisely in order to allow his factories to pollute without restraint? Might the Corrupt Legislation of the work’s title be environmental law, rendered ineffective by Corrupting Wealth? The juxtaposition of law, corruption, and pollution the Library of Congress mural suggests an environmental consciousness in which pollution is something to be regretted at the very least and law has a potential role in mitigating its effects. 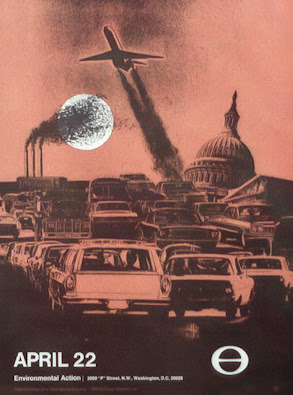 Given its setting, title, and content, Vedder’s mural is political in a way that the Impressionists’ work—and even Dufy’s and Jansen’s (above) paintings and Dickens’s prose, with all their social and moral sensitivities—are not. For Dickens, air pollution symbolizes the law’s corruption and failure; for Vedder, it is the very source of that corruption. In that sense his mural is a precursor of the explicitly political environmental poster art of the 1970s and ’80s, such as a photomontage poster created for the first Earth Day in 1970, depicting the U.S. Capitol as fairly drowning in a sea of smoke and congestion (right).


By the time of the New Deal, American artists associated with the Works Progress Administration, including Joseph Stella,  Frank Fousek, and Todros Geller, were presenting environmental pollution as a physical manifestation of the injustices of industrial capitalism (below). 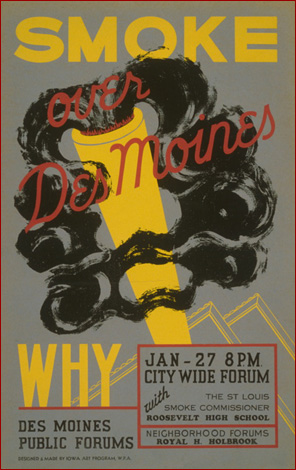 The WPA also sponsored much explicitly conservationist poster art, including at least one in which air pollution and its regulation were the subject, Smoke over Des Moines, Why (c. 1940, right). Works such as these testify to a growing concern over air pollution and its effects, a concern that provided the background for the postwar wave of environmental legislation.

Interestingly, when we get to the “modern” environmental law of the early 1970s, it is art which is often credited with a prominent role in the commonly told origin stories of the environmental movement behind the laws. Icons that are said to have spurred the wave of environmental legislation after the first Earth Day in 1970 include Rachel Carson’s Silent Spring, visual images of Planet Earth as seen from space (below), the Santa Barbara oil spill, and the Cuyahoga River on fire. It might be argued that the recent failure of global society to deal effectively with climate change is at least in part the result of the difficulty in translating the problem into a visual medium. 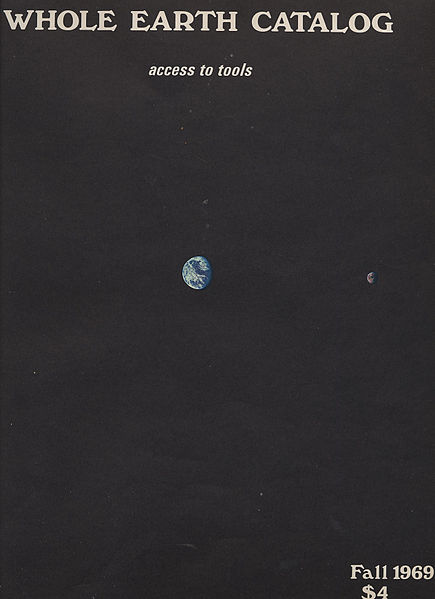 In Part V we will turn to the art and the effects of environmental law. For the rest of the series, see here. For the original article, see here.
Posted by David Schorr at 12:23 PM