The latest in a series based on my article on art and history of environmental law. After looking at what art can teach us about the historical background of environmental law, we turn now to what we can learn from it about environmental law's effects.
The effects of law on landscape are clearly seen in the case of land use law. The U.S. Northwest Ordinance’s imposition of Cartesian order on the living earth is perhaps best appreciated through often beautiful satellite or aerial images (e.g. above). The effects of New York City’s famous zoning ordinance of 1916 were given visual form in Hugh Ferriss’s drawings (e.g. right) and in photographs of the architectural icons built under the code (e.g. below). And the environmental upheaval wrought by American postwar suburban zoning ordinances was given early expression in the utopian/dystopian photographs of places like Levittown, Long Island (below). 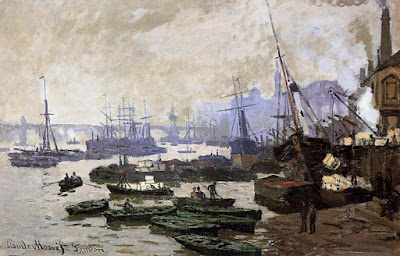 As for pollution law, we return to Monet, whose visits to London in 1870-71 and again in 1899-1901 spanned a period of intensive environmental lawmaking activity in Britain. The Public Health Acts, the Alkali Acts, and other laws mandated consumption of smoke, required best practicable means for mitigation of air pollution, provided for summary process against nuisances, and more.  Yet when comparing paintings from Monet’s first visit, such as Boats in the Pool of London (1871, above) or The Thames Below Westminster (1871, below) with those from around the turn of the century (e.g. Le Parlement), no improvement in air quality is evident. Again the issue of the artist’s objectivity is raised—perhaps Monet’s paintings are less evidence of the actual condition of the environment than of his subjective sight—but yet again this problem is slighter than it may seem at first. If London’s air quality actually improved between 1870 and 1900 in the wake of the contemporary wave of environmental legislation, while this improvement made little impression on contemporary observers, who continued to view London as a smoggy city, that, in itself, is worthy of note. We seemingly have here evidence of the failure of Victorian environmental legislation to achieve its goals, at least in the eyes of one influential observer. Similar conclusions, based on the paintings of the Impressionists and Post-Impressionists, might be reached about the effects of French environmental regulation, going back to a Napoleonic decree of 1810 and before. 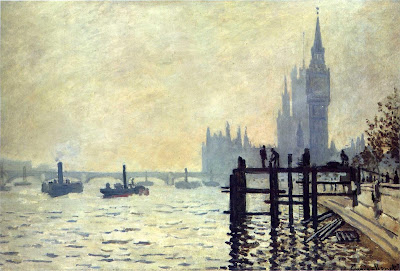 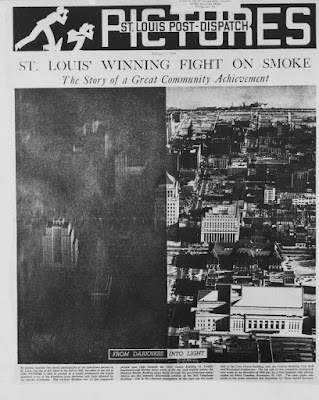 Similarly, mid-twentieth-century American visual depictions of pollution can tell us a lot about the effects of environmental law. The city of Des Moines enacted an anti-smoke ordinance as early as 1911, yet the thick plumes of the WPA’s Smoke over Des Moines, printed around 1940 (and discussed in Part IV), tell us that the city’s anti-smoke ordinance had failed to clean up the air—or at least was perceived as having failed to do so.  In contrast, the city of St. Louis seems to have taken pride in the success of its 1940 anti-smoke ordinance (discussed below), credited with drastic improvements in the city’s air quality. The St. Louis Post-Dispatch explained the manipulated photos on the cover of an edition of its “Pictures” (right) as follows: “By joining together two aerial photographs of the downtown section of St. Louis, the one at left taken in the fall of 1939, the other in the fall of 1940, PICTURES is able to present in a single framework the whole dramatic story of the transition from darkness into light effected by the smoke ordinance.”

In Part VI we will turn to the possibility of using art to uncover hidden historical environmental law. For the rest of the series, see here. For the original article, see here.
Posted by David Schorr at 10:21 PM