As John Shurts puts it in his superb chapter, “Rethinking the Columbia River Treaty,” the treaty began as a means to change the river. “The treaty is not a water allocation agreement. What prompted it instead was the promise of storage in the upstream nation to optimize certain uses of the river in the downstream nation. It was about changing the natural hydrograph. High river flows ran at the wrong time of the year to be truly useful, from the frame of reference of the dominant culture in the developing nation south of the border in the mid-twentieth century” (p. 192). 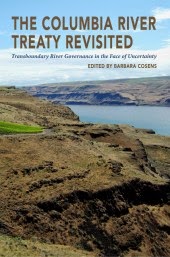 Several chapters stand out as significant contributions to our understanding of the treaty's place in regional and environmental history. Jeremy Mouat's “The Columbia Exchange: A Canadian Perspective on the Negotiation of the Columbia River Treaty, 1944–1964” deftly lays out how the Canadian political landscape bounded the country's negotiators in crafting an agreement with their more powerful southern neighbors. The so-called cooperative development goal, Mouat concludes, “seems to mean implementing longstanding American plans for the river” (p. 30). Nearly alone in this volume, Mary Pearson expresses frustration at the seeming dismissal of Native concerns about treaty negotiations in her contribution, “The River People and the Importance of Salmon.” Pearson implores that any revision of the treaty offers an opportunity “to consider the river tribes' aboriginal and treaty rights to the salmon and the water in the Columbia River” (p. 81). In “When Courts Run Regulated Rivers: The Effects of Scientific Uncertainty,” Carmen Morse sorts out a complicated and often poorly recounted history of contentious judicial reviews of Columbia River management, concluding there is no simple or singular way to apply “best science” to the choices facing the two nations that share the region's most important natural resource.