[We have today a guest post from Paulo Eduardo Guimarães, Senior Lecturer in Contemporary History at the University of Évora and researcher at NICPRI (Research Unit on Political Science and International Relations). Paulo presented a paper on this topic at the recent World Congress on Environmental History at Guimarães.] 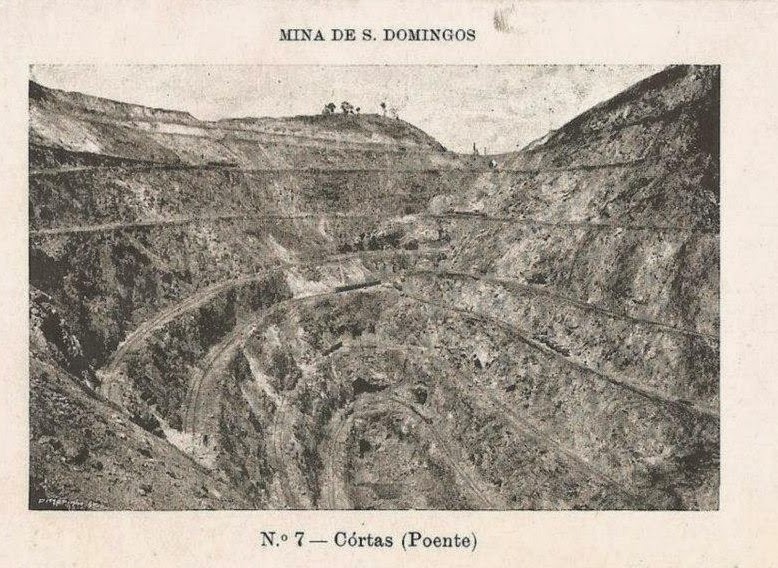 The growth in the demand for sulphur and copper by the British world economy was directly responsible for the spurt in the exploration of old mine deposits of pyrite ores beginning in the middle of the 19th century in the western Mediterranean. As consequence, the roasting of pyrites in blast furnaces or in open air ‘telleras’ in large scale operations led to conflicts with landowners, farmers, peasant communities, miners, and local populations affected by acid rain and sulphur smoke.

The violent incidents of Rio Tinto in 1888, when the Spanish army intervened to repress a peaceful demonstration against that pollution, killing about two hundred men and wounding an indeterminate number of other protesters, became the landmark of that conflict in the historiography of the western Mediterranean mining industry. However, violent reactions against modern mining industries were not exceptional in this part of the world. An account of these types of industrial conflicts in Portugal shows the emergence of popular violent reactions against mining operations due to environmental disruption. These included the occupation of mining fields, ‘Luddite’ actions (destruction of machinery, forests, and mining infrastructure), and sabotage in larger explorations located in the southern Alentejo province and in the mines of the Aveiro district.

The detailed analysis of each incident reveals a more complex picture than the label ‘peasant protest’ or ‘environmentalism of the poor’ suggests. Not only peasants and poor people were involved in collective actions against mining companies; landowners and farmers made use of legal instruments. Yet they were often unsuccessful in court, as the mining law favoured the foreign capitalist ventures. The use of ‘expropriation for public utility’ was a sword of Damocles hanging over these disputes, and the companies often used it.

The liberal legislation enacted after the civil war (1831-1833) gave landowners ownership of underground resources, thus establishing the principle of freedom to negotiate rents over mining activity. However the empowerment of the landowners was considered inadequate for the desirable expansion of industrial activity. New legislation of 1850-1852, much inspired by the Napoleonic code of mines, allowed mining capitalists to negotiate directly with the state, with only a low rent to be paid as mining profits to landowners. Moreover, since the law established that only the government or the civil governors had the power to stop mining works, court decisions in defence of tenants or landowners had a limited effect in preventing environmental disruption. Other legal dispositions extended this legal framework to related mining and transport activities (mining railways, ports, metallurgy), also allowing the government to use the technique of ‘expropriation for public utility’ to allow companies to expand their activities. Mining companies also acquired the status of members of local communities , thus gaining the right to use freely common property such as wood and water from rivers, springs, and pastures. Expanding mining fields became then a regional epicentre, absorbing and mobilizing human and natural resources, and subordinating them to their own social order.

The effects of water and air pollution were at the time regarded as private concerns to be solved mostly through the principles of compensation between individual entities. In practice, the link between agricultural or fishermen's losses on the one hand and mining activity on the other was often difficult to establish, mostly due to differences in social power of the agents and prevailing social values.

Contemporary observers expressed the belief that even in the best scenarios, the liberal (legal) mechanism of landowners’ compensation for the losses caused by mining and metallurgical activities was considered insufficient. The Portuguese Parliament echoed those concerns, but never found a legislative solution that reinforced the bargaining power of landowners and farmers. The superior interest of the state, the direct tax income from mining, and the desire to follow similar legal frameworks and administrative principles used by the advanced industrial nations became recurrent arguments in favour of accepting mining's collateral environmental disruption.

At the same time, companies exploited various technological paths in order to pursue their objective of locally processing pyrite ores. The adoption in the late 1870s by Mason & Barry of hydrometallurgy in the largest Portuguese mine at the time, Saint Domingos (Mértola, Alentejo), responded to the need to increase productivity through large scale operations, while also allowing the exploitation of ores rich in sulphur but poor in metals (<2% Cu), without the costs of air pollution that affected people and agriculture. The result, however, was the pollution of the river Guadiana and its tributaries, directly harming the income of the fishermen communities. Similar strategies were followed by other mines in the South. Thus hydrometallurgy created a new landscape, with the larger pyrite mines surrounded by clean but acidic lakes and exotic eucalyptus (planted to prevent malaria outbreaks). Kilometres of sulphuric water conduits crossed the fields in open air to the streams, poisoning water wells in the dry fields. At the beginning of the 20th century the basin of the two major rivers of Alentejo, the Sado and the Guadiana, were affected by the discharge of acid waters, thus affecting agriculture and pasture land.

The long process of social accommodation from the earlier, reactive, violent disputes to negotiation and social change led by the new mining environment and, at a later stage, the different fate of these brownfields, should be also emphasized.   After 100 years of continuous exploitation, followed by decades of abandonment of mining activity, the artificial lakes of acid water remain part of this new landscape, their stock of sulphur water increasing every year. In spite of the great environmental risks involved in the abandoned pyrites mines, no social stress remains visible in these impoverished regions.