Ownership of natural resources in the Third World

Tomorrow is the 41st anniversary of the Chilean coup d'état in which a military junta with Augusto Pinochet at its head overthrew the government of Salvador Allende. A while back Chris Dietrich had a very interesting post on Imperial & Global Forum in which he explored the motivations behind the vehement American opposition to Allende's regime. Some selections: 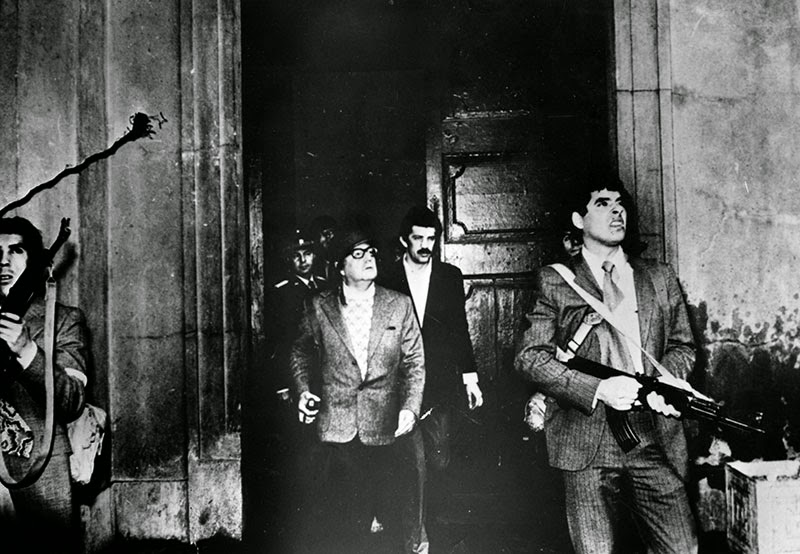 “Allende was assassinated for nationalizing the . . . wealth of Chilean subsoil,” Pablo Neruda wrote on September 14, 1973. Neruda was lamenting the overthrow and death of his friend, Chilean President Salvador Allende, a week before he himself succumbed to cancer.  “From the salt-peter deserts, the underwater coal mines, and the terrible heights where copper is extracted through inhuman work by the hands of my people, a liberating movement of great magnitude arose,” he continued.  “This movement led a man named Salvador Allende to the presidency of Chile, to undertake reforms and measures of justice that could not be postponed, to rescue our national wealth from foreign clutches.”  Unfortunately, Allende’s flirtation with economic nationalization ran up against the country’s multinational business interests, particularly those that had support from the U.S. government. His socialist reforms were also ill timed; the U.S. government’s ideological view towards the global economy tended towards the Manichean.

Allende himself became a vocal proponent of the Third World’s broader challenge to the international economy, which was directed through the United Nations Conference on Trade and Development, the Group of 77, and the Non-Aligned Movement.  Since the end of the Second World War, groups from Latin America, the Middle East, Asia, and Africa had discussed the problem of imperial continuity in the international economy.

Theirs was a widely shared moral and political stance of concise logic; decolonization entailed more than political independence from a colonial master, and nowhere did imperial power exert itself with greater vigor than in the material worlds of law and economics.  This Third World challenge also held a particular policy prescription designed to end economic domination — if the “poor lands” remained ensconced in the shadow of empire, the use of national legal power offered an escape. In this context, the CIA reported in January 1969, “further steps toward greater government participation in or even outright nationalization of” the holdings of multinational corporations in Chile were “inevitable.”

Based on the guiding principal of permanent sovereignty, advanced in the previous two decades as part of a new international law in the UN General Assembly and Economic and Social Council, developing nations held the right to “rebalance” the international economy. Upon nationalizing the major copper mines in Chile, Allende pushed to host the third ministerial meeting of the UN Conference on Trade and Development in 1972.  When he gave a stirring address welcoming the diplomats to Santiago, he was followed to the podium by Raúl Prebisch, who by that time was considered the father of the Third World critique of global economic inequality.  Prebisch thanked Allende for hosting the conference, and began his speech.  The joint problem of the poor nations was “above all to achieve sovereignty in a full sense,” he said.  The poor nations needed “to establish it on solid foundations and then pass from the present relationship of dependence—which is unacceptable in the light of the political maturity of our peoples—to interdependent relationships which involve new forms of cooperation.”

One can see the thrust of this position in any number of the meetings that preceded the 1974 UN Declaration of a New International Economic Order, which was the culmination of the Third Worldist program of “economic emancipation.”  For example, the 59 foreign ministers of the Non-Aligned Movement regrouped in Guyana months after the Santiago meeting.   There, they signed the 1972 Georgetown Declaration, which gave  “full support” to Allende and other leaders that “in the exercise of their sovereign rights over the natural resources of their countries [had] nationalized the interests of powerful foreign monopolies.”  As in Santiago, the ministers turned directly to the expression of sovereignty as a legitimate and moral international stance.  “[I]t is fundamentally important to stress that the full exercise of their sovereignty over natural resources is essential for economic independence,” the foreign ministers wrote.  Moreover, economic emancipation was “closely linked to political independence, and that the latter is consolidated by strengthening the former.”

If the imperial past required correction, there was clearly space within that argument for more nuanced, less dialectical national policies.  For example, Allende did not see the July 16, 1971 constitutional amendment nationalizing Chilean copper investments as contradictory to his stated policy of utilizing access to investment capital in the “Western financial system” to develop the national economy.

In fact, U.S. Ambassador Edward M. Korry had negotiated with Allende and other government leaders a compromise by which the Constitutional Amendment was modified to provide compensation to the affected multinational companies.  (To the great ire of Korry, the Nixon administration, and corporate executives, Allende deftly used the compromise to insist that “excess profits” from the past be deducted from the settlement.)

At the same time, Allende had already concluded sales agreements for nationalized copper with other multinational corporations, including RCA, Bethlehem Steel, and Bank of America.  What the State Department called the “Chilean propaganda attack” on two firms, Anaconda and Kennecott, was thus more of an attempt to isolate the larger and more controversial businesses from other U.S. investors than to attack foreign capital investment writ large.