More on (transatlantic) commons scholarship: The editors of the International Journal of the Commons (Frank van Laerhoven, Michael Schoon, Sergio Villamayor-Tomas) just published an interesting quantitative review of commons scholarship over the last five decades, "Celebrating the 30th Anniversary of Ostrom’s Governing the Commons: Traditions and Trends in the Study of the Commons, Revisited". There are interesting statistics and tables on journals, citations, disciplines, and more. (For a different take on the history of the field, see The Tragedy of the Commons at 50.) Some highlights:

The start of commons scholarship can be understood as growing out of a rejection of Hardin’s prediction of natural resource degradation unless managed by governments or through private property rights (Poteete et al. 2010). Over time, however the approach appears to have been evolving.

Arguably, commons studies grew out of concerns associated with the tragedy of the commons. Accordingly, typical studies of the commons have been associated with local contexts, particularly with common pool resources such as forests, fisheries and irrigation, and an interest in the opportunities and challenges of common property rights and rules....

Hardin (1968) asked us to “picture a pasture, open to all.” Pastures, together with fisheries, forests, irrigation systems, and water management belong to what the authors of the 2007 study referred to as the “Big Five” in the study of the commons. Through 2007 these topics drew most of the combined attention of commons scholars. Overall, we find that this trend continues [unabated]. Over time, we see a relative increase in interest in water and fisheries since 2007.

Where Hardin claimed that only the state or the market could prevent a tragedy of the commons, Ostrom dedicated most of her career to showing how there is a lot of room on the spectrum that ranges between these two extremes (e.g. Ostrom, 1994). Figure 18 presents a crude way to gauge our field’s attention to the market, the state, and self-governance over time. 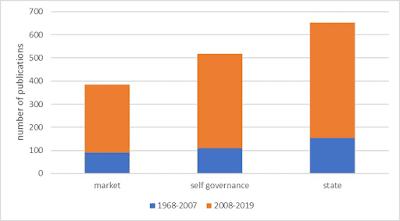 As the graph suggest[s], commons scholarship has increasingly included the role of governments and markets in its discourse. We do not know, however, how these terms are used. Much of the commons scholarship grew out of a rejection of governments and market as the only solutions to natural resource management. There are signs that such an “adversarial” approach has reversed over time. Paradigmatic examples are the emergence of new co-management literature (Berkes 1994, Frey et al. 2016) or recent calls to dig deeper into the specifics of hybrid modes of governance (Lemos and Agrawal 2006, Driessen et al. 2012, Villamayor-Tomas et al. 2019). A question for further research is whether the trend unveiled here corresponds with a qualitative change in the way the trichotomy communities-government-markets is addressed.

In sum, this admittedly coarse and rather unsophisticated bibliographic analysis appears to reveal the following. We publish more and more (but so do all other fields and domains). During the last 50 years, we have found 1,900+ peer-reviewed journals willing to publish our work. Since 2007, the International Journal of the Commons appears to have become our favorite outlet. There’s an incredible number of scholars that publish or have published on the commons during the last 50 years – approximately 6,500. Publications get noticed and cited (21 times on average), an indication we think, of the fact that the debate on the commons is still ongoing and vibrant. Many disciplines are involved – we count 28 subject areas – but the social sciences, more particularly economics, dominate. There is remarkably little evidence of multi/inter-disciplinarity or across-country collaboration. We are mostly affiliated with universities in the USA and Europe, but we mostly do research, elsewhere (i.e. mostly in what some refer to as the global south). We seem to be consistently interested in ‘big five’ topics (i.e. forests, fisheries, irrigation, water and rangeland), and in an institutional take on the commons. We have always liked and continue to favor case studies, but there appears to be a growing concern about the lack of standardization for the sake of comparison, and subsequently, theory development. In an era where planetary boundaries are coming into sight or have been surpassed (Steffen et al. 2015), we are glad to see that our field has embraced global and national issues, besides its tradition of applying local and community perspectives. Where we once started off by contrasting the market and the state on the one hand, with self-governance alternatives, on the other, we now see a tendency to look beyond this dichotomy and study co-management, co-production the role of markets and participation, instead.