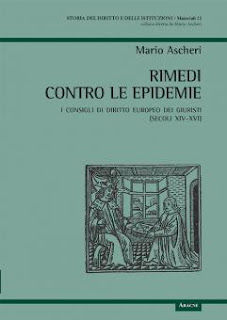 In the large and ever-growing body of scholarship on the social history of medieval and early modern epidemics, a tendency exists to favor the second of these three aspects, looking at social life in time of disease outbreaks mostly through the lens of criminal justice and the repressive power deployed by authorities in order to enforce their emergency regulations. There are several good reasons justifying that choice....

Nevertheless, one might still legitimately wonder whether a different set of judicial sources could provide a somehow different picture of the challenges the plague posed at various levels of society. The sudden disappearance of people and properties confronted survivors with a whole series of legal problems that were not reducible to the grammar of crime and punishment. How to establish, for example, the correct line of inheritance when potential heirs die one right after the other, and when, because of the general confusion caused by disorganization and fear, no medical records exist to prove who died first and who died later? Should rent still be paid even though tenants had fled the rented premises to find shelter in a safer place? More generally: should contracts still be honored even though the plague had prevented their full execution? Questions of this sort may lead to a richer historical understanding of social dynamics in times of health crises, by adding to the ‘vertical’ observation of the relationship between authorities and their subjects the ‘horizontal’ auscultation of the connections and exchanges between the subjects themselves. For one thing is sufficiently clear: although narrators, from Boccaccio to Manzoni through Defoe, have conventionally depicted plague-ridden communities as unruly places where people move and act ‘beyond the usual laws’, law itself kept in fact operating throughout the epidemic storm as the fundamental infrastructure of associated life.

The second and third chapters... deal with the solutions envisaged and proposed (with greater or lesser confidence) by late medieval law doctors to the problems raised by epidemic outbreaks for, respectively, the public management of cities and the regulation of private business. Sannazzari, Aldobrandini and Previdelli’s tracts in fact capitalized on a large pool of earlier consilia, quaestiones and commentaria on Roman and Canon law, gathering and organizing sparse hints on the matter that could be gleaned from them. Sixteenth-century jurists seem to agree with their predecessors on the supernatural causes of the plague, which represented the distinctive way in which God chose to wage war against humans because of their sins. The warlike metaphor—which seems to still have some currency in today’s parlance about the present predicament—was not, however, a simple rhetorical device. In the works of ius commune jurists, the notion of bellum Dei was taken literally so as to draw some effective legal consequences from it and solve, by virtue of analogical interpretation, the occasional legal conundrums. Thus, for example, the difficulty over the possibility of imposing an emergency property tax on people who were normally exempted from all sorts of contribution could be dodged by noting that, in times of war, even those who were covered by fiscal immunity were compelled to pay for the sake of the common good.

There's a lot more interesting stuff here; here's a section that might hit home for many readers:

The doctores were not necessarily interested in the defense of the weaker party of the legal relation. When discussing the contract of locatio operarum, they seemed to have not even tried to find a way to ensure that workers (who figured here as locatores of their labor power) were to be paid even when their employers (the conductores of that labor power) had escaped from the plagued city and shut down their businesses, leaving them jobless. The only exception jurists could think of concerned, not surprisingly, the salary of university professors. Following Bartolus’ opinion, they all agreed that lecturers had to be paid in full, even if the plague had caused universities to close and courses to be canceled. Their fee was in fact not due as a remuneration for a mechanical and manual activity (propter laborem), but as a reward for a priceless intellectual performance (propter probitatem intellectus principaliter) that exceeded what normally applied to baser kinds of work.

For more on the legal history of epidemics, see here.