We've written before (here and here) on Julian Juergensmeyer as an early scholar of environmental law in the United States. The Journal of Comparative Urban Law and Policy recently published a Festschrift in his honor, including an article by Becky Jacobs, "Professor Julian Conrad Juergensmeyer's 'Impact': Scholarly, Theoretical, and Practical". Jacobs notes the influence of Juergensmeyer's "The Common Lands Concept: A 'Commons' Solution to a Common Environmental Problem" (co-authored with James Wadley), published in Natural Resources Journal in 1974.

There's a deeper "Atlantic crossings" story here, too, one which I have yet to fully explore: The 1974 article was preceded by an earlier one by Juergensmeyer, with overlapping content and a similar title, "The Common Lands Concept in American Jurisprudence", published in a 1973 issue of the Belgian Revue De l'Institut De Sociologie. The special issue on "Les Terres Communes: Eléments d'approche historique et comparative" contained a series of articles by scholars on communal property in various legal systems: Scotch, Soviet, French, Belgian, African, and American. The other authors were all European, mostly from Brussels.

Yet the origins of the issue were actually American. As Jacques Vanderlinden explained in his introduction (see below), the idea for the collection arose among the editors of the Boston University Law Review in 1970 (presumably when Vanderlinden was visiting BU), but subsequently dropped by the next editorial board. So the project moved to Brussels and took on a more European cast; Juergensmeyer must have been picked while he was studying in Europe in the early 1970s. 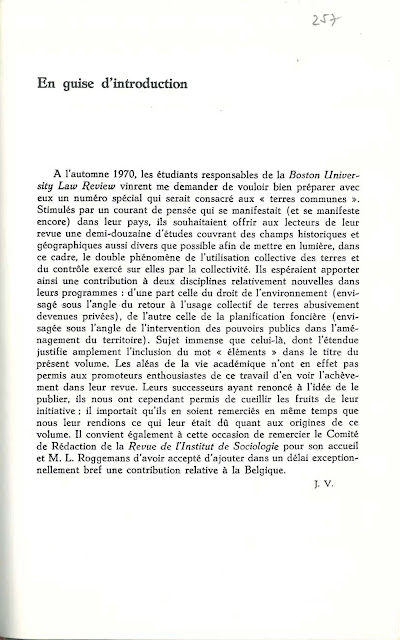