A recent issue of Perspectives on Politics has a review by Richard Andrews of Kimberly K. Smith's The Conservation Constitution: The Conservation Movement and Constitutional Change, 1870–1930 (University Press of Kansas, 2020). Andrews writes that while existing works on the history of US conservation policy "focus on the policies expressed in statutes and regulations and on the actions of the administrative agencies, with only limited mention of the legal and constitutional arguments that were battled out in the courts", Smith's book "provides a valuable new complement to these studies by presenting a far more detailed history of the legal and constitutional arguments presented to and ultimately decided by the courts during the period from 1870 to 1930". Andrews continues: 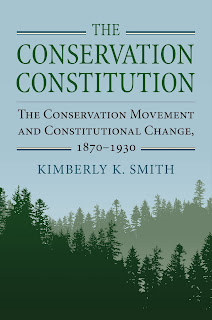 Smith’s primary aim, well summarized in the final chapter (pp. 254ff.), is “to explain how lawyers and judges reworked constitutional doctrine to accommodate the expansion of state power over the natural environment during the Progressive era; and more specifically, how legal decisionmakers conceptualized the natural environment, its relation to human society, and the public interests at stake to create the constitutional ‘common sense’ that federal and state governments have authority to protect natural resources and the integrity of ecosystems in the interest of future generations.” In the process, she discusses the interweaving of principles such as the public trust doctrine, the police power, public nuisance doctrine, parens patriae standing, the interstate compacts clause, and federal constitutional arguments based on the interstate and foreign commerce, property, war, treaty, spending, and eminent domain powers, as well as the interstate nuisance doctrine. She argues that even though many of these issues continue to be argued in the modern era, the sheer number of these constitutional foundations, once accepted by the courts, has ultimately made governmental environmental management authority strongly resilient to challenges. She also urges greater recognition of the roles of skilled lawyers and judges, along with the better-known politicians and citizen advocates, in achieving this stronger role for the state in environmental conservation. Finally, she notes the continuing need for further evolution of our understanding of the Constitution: the Progressive understanding did not address the distributive imperfections of environmental regulation, nor the implications of administrative processes for procedural justice, nor—perhaps most problematic today—the absence of effective capacity for national economic and environmental planning, particularly in international cooperation to address global environmental challenges such as climate change.

After some minor criticisms, Andrews adds:

One broader issue that I would question is Smith’s reference to these policies as instances of “green government.” She makes a thought-provoking point about the successful use of arguments favoring protection of forest ecosystems for their benefits to streamflow and water supply, and of birds for their control of agricultural insect pests, describing these as early arguments for protecting what today would be called “ecosystem services.” This seems to me a valuable reminder that not all these arguments are new. To refer generally to this era as an advance of “green government,” however, seems to me a bit too casual. Progressive policies were sometimes “green” in the sense of protecting natural species and ecosystems, and certainly they were improvements over previous unregulated exploitation—yet most were instances of government-led economic development, with major (and often not green) transformative impacts on the environment.