Dan Farber recently posted at Legal Planet on the environmental aspects US President Lyndon B. Johnson's "Great Society". From the post: 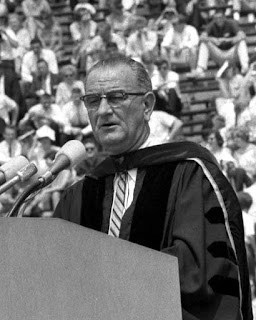 When he announced the Great Society in a commencement speech at the University of Michigan, Johnson gave the environment a leading place. He began his May 1964 speech with the plight of American cities, where he decried “the decay of the centers and the despoiling of the suburbs.” Then he turned to the environment: “The water we drink, the food we eat, the very air that we breathe, are threatened with pollution. Our parks are overcrowded, our seashores overburdened. Green fields and dense forests are disappearing.” He added, “For once the battle is lost, once our natural splendor is destroyed, it can never be recaptured. And once man can no longer walk with beauty or wonder at nature his spirit will wither and his sustenance be wasted.”

Johnson’s Presidency was accompanied by a surge of environmental laws. Here are some of the laws he signed:

Many of these laws are remembered today only as the preludes to the stronger laws that followed in the 1970s. But these Johnson-era laws provided the foundation for that later legislation, and they set the precedent for vigorous federal protection of the environment.

For a different list of environmental laws signed by LBJ, see here.
Posted by David Schorr at 9:47 AM