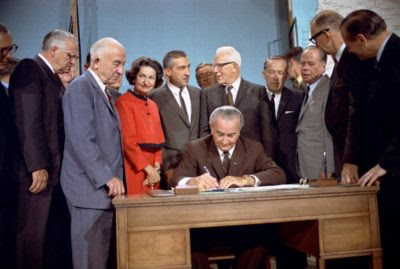 Richard Frank recently posted at Legal Planet on the 50th anniversary of the enactment of the US Wild and Scenic Rivers Act. Some excerpts:


1968 was an especially tumultuous year in modern American history.  The nation endured the assassinations of both Martin Luther King, Jr. and Robert F. Kennedy; then-President Lyndon Johnson announced he would not seek reelection due to growing public dissatisfaction with the government’s conduct of the Vietnam War; and protests and riots consumed Chicago, Detroit, Washington, D.C. and many other American cities.

So it was in stark contrast and a most welcome development when in 1968 Congress passed, and (in October of that year) a lame duck President Johnson signed into law the Wild and Scenic Rivers Act....  The Act represented a major political and conservation achievement 50 years ago.  It remains an important cornerstone of America’s conservation efforts a half century later.

Under the WSRA, rivers are classified as wild, scenic or recreational.  Wild River Areas are those that are free of dams and generally inaccessible except by trails, with watersheds or shorelines essentially primitive and waters unpolluted.  Scenic River Areas are those free of dams and with shorelines and watersheds still largely primitive and undeveloped, but accessible by roads.  Recreational River Areas are readily accessible by road or rail, that may have some development along their shoreline, and that may have undergone past dams and diversions.  Regardless of their classification, each river in the National Wild and Scenic Rivers System is administered with the goal of protecting and enhancing the values that caused it to be designated in the first place.

The WSRA, authored by Senator Frank Church (D-Idaho), was a legislative response to the fact that in 1968, many if not most of America’s rivers were already dammed for hydroelectric and flood control projects.  (By comparison to rivers designated under the WSRA, more than 75,000 large dams in the U.S. have modified over 600,000 miles of American rivers.)