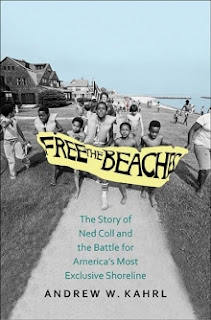 A while back we noted an H-Environment roundtable on Andrew Kahrl's The Land Was Ours: African American Beaches from Jim Crow to the Sunbelt South. Now Kahrl has turned his attention to the North in Free the Beaches: The Story of Ned Coll and the Battle for America’s Most Exclusive Shoreline (Yale UP, 2018), and Law & History Review has a review by Deborah Dinner. Dinner writes:


On July 4, 1974, a daring, no-holds-barred activist named Ned Coll launched an amphibian assault on an exclusive Beach Club in Madison, Connecticut. Coll’s comrades included more than fifty children from nearby Hartford’s poor, majority African-American housing projects. The children, their mothers, and staff members of Revitalization Corps, an advocacy organization dedicated to racial equality and justice for the poor, were clothed in bathing suits and armed only with laughter, songs, and excitement. Yet the affluent white parents on the beach saw the newcomers’ entry as an ambush and quickly retreated, children in tow, to their private club. The episode constituted one highlight of Coll’s campaign to win public access to the beaches along the shoreline of a state plagued by extreme wealth inequality.

A somewhat obscure common law doctrine—newly and hotly contested in the 1970s—rested at the heart of Coll’s creative protest of the Madison Beach Club. The public trust doctrine...

Free the Beaches joins an important body of scholarship plumbing the depths of racism in the North. Historian Andrew Kahrl argues that New England manufactured its own brand of Jim Crow that operated “through ostensibly color-blind and race-neutral land-use regulations and the privatization . . . of public space” (13). The book begins by recalling how, in the first half of the twentieth century, the federal government, localities, and real estate boards all produced a racial divide between cities and suburbs. Kahrl’s focus on the Connecticut shoreline newly illuminates the ways in which wealthy white suburbanites strove to preserve their towns’ inflated property values and social exclusivity, from mid-century through the present. They fought hard to keep poor people of color out of ostensibly public schools, allegedly free housing markets, and state parks and beaches. When judicial and legislative action made explicitly discriminatory practices unlawful, advocates deployed formally race neutral traditions of private property and local autonomy. Kahrl notes that Connecticut’s affluent white enclaves used what political scientist Margaret Weir terms “defensive localism” to keep outsiders at bay (p. 35).

In analyzing the battles over Connecticut’s beaches, Kahrl deftly illuminates shifts in liberalism from the sixties to the seventies. His protagonist, Ned Coll, fought to preserve John F. Kennedy’s vision for a “New Frontier” and embraced Robert Kennedy’s position that liberal ideals came with a cost—one that the privileged should pay (p. 120). Coll’s political philosophy butted up against a “growth liberalism,” championed by Lyndon Johnson, which did not demand self-sacrifice (p. 121). When the pie stopped expanding in the early 1970s, the New Right was able to caricature federal anti-poverty programs as serving the interests of a leviathan bureaucracy committed to crude redistribution. In this broader political context, Coll’s activism hit a wall. While Kahrl celebrates activists’ hope and determination, Free the Beaches ends on tragic notes.