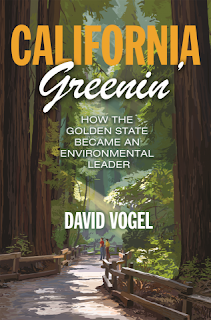 In the newest addition to the Studies in American Politics series from Princeton University Press, David Vogel in California Greenin’: How the Golden State Became an Environmental Leader (Princeton UP, 2018) asks how it is that California has had such success in protecting its environment and has become a world leader in making and implementing environmental policy and law.


This book describes what is in many respects a remarkable success story. It demonstrates how a state government has been able to overcome substantial obstacles and enact a wide range of regulations that have made measurable - though admittedly uneven – progress in protecting its environment and improving the quality of life of its residents. Although California has often seemed on the verge of ecological (as well as economic) catastrophe, it has proven remarkably resilient. The state’s ability to remain the most important source of environmental policy innovation in the United States over so many decades and across such a diverse range of policy areas is a significant accomplishment.  It is worth understanding why and how this particular state came to play such an important leadership role in this area, as well as the broader policy implications of such leadership [p. 6].

One of those implications, Vogel writes, is that the story of California’s ascendancy holds lessons for the world:


What happens in California…has a global impact.  During the 1980s, the relative stringency of California’s vehicle emissions standards was an important reason why Germany chose to support the adoption of similar standards by the European Economic Community… More recently, according to…a Nobel Prize-winning scientist from Mexico, “the rest of the global economy is looking to California, as one of the world’s largest economies, to take the lead” in addressing the risks of global climate change.  The state has come to play an increasingly active international role [p. 8, citations omitted].

When it comes to explaining how and why California has become such a successful and resilient law and policy leader Vogel focuses on three factors he considers to be interconnected in varying ways at different times in the state’s history, depending on the issues being addressed.

One is the political mobilization of California’s citizens, most especially in the late 1960s and 1970s.  A second is the support for environmental policy initiatives provided at critical moments by least some important segments of an often divided business community.  And a third is the growth over time of the state’s capacity to design and implement programs of resource management and environmental regulation, in some cases in state agencies recognized as world leaders in the work they do [1].

This is obviously a provocative thesis and it may well keep students of the history of California environmental law and policy busy for some time to come.  But it also and immediately raises the question of why, if the story of California’s ascendancy, which on Vogel’s telling has its roots in the late nineteenth century, is so remarkable and potentially so influential, the story hasn’t been told before now.

The answer is that the story has been told, at least in part, twice before, although Vogel chooses not to engage seriously with either prior account [2].

In a book by Stephanie Pincetl published in1999 [3], a work Vogel cites just once, the quality of the history is not as impressive as the author’s political critique of the platform on which the California Progressives substantially reformed California government between the 1890s and the 1930s [4].  Although Pincetl touches on many of the same episodes in California’s environmental history that are also discussed by Vogel – the toll exacted by hydraulic gold mining, the fight to save the redwoods, the advent of the state water project, and the struggle to protect the California coast, for example – her book is less an attempt to explain California’s ascendancy than it is a polemic in favor of making law and policy in the future more transparent and participatory.  Since the work bears on Vogel’s thesis only obliquely and its history is suspect, he is right to note it only in passing.

In a second case, however, Vogel’s unwillingness to engage is less forgivable. It is true that in a1964 account [5] of the relationships between state government and economic change in California, including quite prominently the laws and policies enacted to improve the management of natural resources, Gerald Nash deals with only part of the ascendancy story Vogel wants to tell – the part between 1849 and 1933.  And from Vogel’s point of view the most important foundations for the California ascendancy were laid after 1933, as evidenced by the attention he lavishes on the state’s efforts to deal with coastal conservation, air pollution, energy conservation and development, and climate change [6].

But Nash’s work has stood the test of time extremely well, chiefly because of its acute focus on the ways in which changing relationships over time between the major institutions of California government –- the legislature, the courts, the executive, organized interests, and the public at large -- have helped to shape both California’s economy and its environment.

Vogel is evidently uncomfortable dealing with the details of legal and institutional dynamics.  He mis-states, more than once, the proper names of key California environmental statutes.  He seems to be aware that legislative leaders can play critically important roles in developing forceful environmental laws and policies, but refers to Leo McCarthy, a key legislative player in California coastal conservation in the 1970s, for example, as Kevin McCarthy, a member of the Republican leadership team in the current U.S. House of Representatives. These errors might have been caught by a closer editorial review of the book.

But the larger and much more important point is that there is no clear sense in Vogel’s account of the California ascendancy that institutional pluralism has opened opportunities for strategic interventions in law and policy making, and that vital parts of the story of the California ascendancy have to do with the ways those opportunities have been skillfully exploited at different times by different interests. The instrumental use of law and litigation is a particular casualty of this neglect.

Vogel has no choice, for example, but to recognize the Bloomfield mining decision [7] as a key intervention by the courts in efforts to bring a halt to the environmental depredations hydraulic gold mining was visiting on California agriculture.  He makes the point that this intervention was orchestrated with skill and determination by an agricultural interest on the verge of realizing great wealth from the resources mining adversely affected.

But thereafter, save for a brief, passing reference to the Mono Lake public trust case [8], the California courts are essentially absent from the story Vogel tries to tell.  The part of the story that leads, for example, from Crandall v. Woods to Lux v. Haggin to Herminghaus v.Southern California Edison to the 1928 state constitutional amendment seeking to establish the public interest in a reconciliation of riparianism and prior appropriation under the banner of reasonable and beneficial use of the state’s water resources is missing [9].  The interplay of litigation and statute writing in regulating the use of forests is missing [10]. And most surprisingly of all perhaps Vogel misses the role played by litigation and the courts after Friends of Mammoth [11] not just in laying the groundwork for but also in the detailed, decades-long supervision of a significant, new and world-class business in California, the conduct of environmental impact assessments [12].

So, while there is much to admire in Vogel’s telling of a story that is much in need of being told and which could have held out the promise of bringing Nash’s seminal 1964 work up to date, the warp and weft of the canvas on which Vogel paints his ambitious picture of the California ascendancy is too course-grained.  A determined focus on the interplay between mobilized publics, major economic actors, and competent administrative agencies cannot properly or fully account for the inter-mediating role, sometimes conservative but often in recent decades bold and creative, of the California courts. It is a role they continue to play in important and consequential ways [13], and future students of the California ascendancy will want to give it especially careful attention.

[1] A number of other explanatory factors that could be taken into account but are not considered to be primary drivers of the California ascendancy are discussed by Vogel at pp. 17-19.

[2] The number of previous accounts would be three if one included Carolyn Merchant (ed.), Green versus Gold: Sources in California’s Environmental History (Washington D.C.: Island Press, 1999), but as the title implies it is a work more of compilation than of explanation.