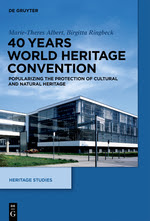 The website of the Institut Heritage Studies has three reviews of the oddly titled (or translated) 40 Years World Heritage Convention: Popularizing the Protection of Cultural and Natural Heritage by Marie-Theres Albert and Birgitta Ringbeck (De Gruyter, 2015). Some excerpts from Klaus Hüfner's review:


The Convention for the Protection of Cultural and Natural Heritage (World Heritage Convention) was adopted by the General Conference of UNESCO in November 1972, but only came into force in 1975. The Convention, to date ratified by 191 States, belongs without doubt to the most successful international legal documents; it enjoys a tremendous popularity not only in Germany but also worldwide.

The volume consists of seven chapters. The introductory Chapter 1 postulates the preservation of heritage as “an exceptional political, participatory and interdisciplinary act” (p. 2). It follows that it is necessary both in the nomination as well as in measures for the preservation of cultural and natural sites that, “as far as possible, all groups of affected peoples at the local, national or international levels” be involved (p. 3). This demand for critical and constructive participation runs like a red thread through the individual chapters. Another critical remark, on which following chapters go into depth, refers to the Eurocentric predominance. The authors speak of a “glaring imbalance” between the objectives and the implementation of the Convention when one considers the number of inscribed sites in Europe and North America compared to the rest of the world (pp. 5-9).

Chapter 3 discusses in more detail the evolution of the World Heritage Convention and the associated perspective changes over time, among which four phases are distinguished, which moved away from the initial strict, conservative interpretation towards a popularization of World Heritage. Already in the first phase (1978-1991) the imbalance between “Europe and the rest of the world” (p. 60) could be seen in inscriptions, which, in spite of the increase in the total number of inscriptions in the following three phases up until 2013, still hovered around 50 percent. In 1994, UNESCO finally adopted a Global Strategy to reduce the geographical and cultural imbalances. It involved the question of “how to integrate the visions of cultural diversity as defined in the Convention in the form of intercultural, religious, authentic or social views of diversity into the overall aspect of heritage” (p. 84). But the imbalance continued, the lack of financial and human resources needed to successfully complete the nomination process being suggested as a key reason (p. 93).