Digital library II: A Treatise on the Law Relating to the Pollution & Obstruction of Watercourses (1877) 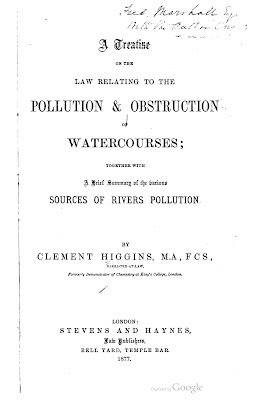 Following up last week's post on Michael Lobban's piece on the British Rivers Pollution Prevention Act, 1876, the second work to be added to our digital library of historical environmental law is Clement Higgins's A Treatise on the Law Relating to the Pollution & Obstruction of Watercourses, published in London by Stevens and Haynes in 1877 (a year after enactment of the water pollution legislation). (An 1882 advertisement for the work is here.)

Just as the treatise on game law covered here last week emphasized the inherent conflict of interest between different social groups and the distributive effects of the law, Higgins writes in the Preface:


It is to the interest of the public, and to the majority of riparian proprietors, to protect the purity of our rivers, whereas it is generally to the convenience of sanitary authorities and of manufacturers to pollute them.

The author was apparently not only a barrister but also a scientist, "formerly Demonstrator of Chemistry at King's College, London".

The treatise is divided into two parts: Part I covers the 1876 statute, organized around different types of pollution: solid matter, sewage, manufacturing effluents, and so on. Part II, entitled "Riparian Rights and Their Protection", covers the common law of water rights with an emphasis on issues of pollution.

A long appendix reproduces statutory provisions on the subject, a useful resources for any historian wanting to understand the environmental regulation of the time, anchored in laws that we might not recognize as "environmental" today, such as the Metropolis Management Act, 1855.
Posted by David Schorr at 7:00 AM