Digital library I: A New Treatise on the Laws for Preservation of the Game (1766) 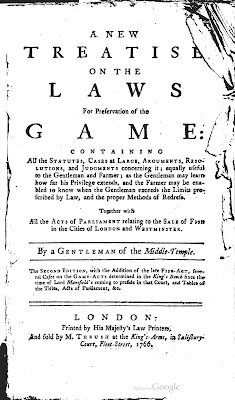 So (as Ann Wilson sang), the first post in the digital library of historical environmental law series is on A New Treatise on the Laws for Preservation of the Game, first published in 1764; the second edition, available online, was printed in London in 1766 by His Majesty's Law Printers.

The title page gives the author as "a Gentleman of the Middle-Temple"; said gentleman was apparently one Timothy Cunningham, a prolific author of law books in eighteenth century Britain.

The title of "Gentleman" may have been about more than manners or class, as the long title of the treatise has this explanation (Oklahoma!, anyone?): "Containing All the Statutes, Cases at Large, Arguments, Resolutions and Judgments concerning it; equally useful to the Gentleman and Farmer; as the Gentleman may learn how far his Privilege extends, and the Farmer may be enabled to know when the Gentleman exceeds the Limits prescribed by Law, and the proper Methods of Redress." So the author must have been something of a "sporting gentleman" (as he puts it on in the "Advertisement") himself, not simply a disinterested scholar.

(As an aside, the celebrity of Lord Mansfield in his own day is evident in the second edition's title page, advertising that the work includes "the Addition of the law Fish-Act, several Cases on the Game-Acts determined in the King's Bench since the time of Lord Mansfield's coming to preside in that Court", and more.)

The treatise largely reproduces English legislation on the subject, legislation that is striking for its quantity and the thickness of the regulation it imposed. For instance (p. 264), a statute of 1389 (13 Ric 2 c 13) declared:


FORASMUCH as divers artificers, labourers, and servants, and grooms, keep greyhounds and other dogs, and on the holy-days when good christian people be at church, hearing divine service, they go hunting in parks, warrens, and conigries of lords and others, to the very great destruction of the same, and sometime under such colour they make their assemblies, conferences, and conspiracies for to rise and disobey their allegiance: it is ordained and assented, that no manner of artificer, labourer, nor other layman, which hath not lands or tenements to the value of forty shillings by year, nor any priest, nor other clerk, if he be not advanced to the value of ten pounds by year, shall have or keep from henceforth any greyhound, hound, nor other dog to hunt; nor shall they use fyrets, hays, nets, harepipes, nor cords, nor other engines for to take or destroy deer, hares, nor conies, nor other gentlemens game, upon pain of one year’s imprisonment...


And, for the more expeditious conveyance of fish by land carriage, be it also enacted by the authority aforesaid, That every carriage which shall be used for the conveyance of such fish as aforesaid, shall only carry fish,… with the necessary package and implements which shall belong to such carriage; and shall be marked on the outside Fish Machine Only; and shall have the name or names, and place or places of abode, of the respective owner or owners thereof, entered at the office of the commissioners for licensing hackney coaches; and for every such entry, only one shilling shall be paid to the clerk there; and the said commissioners are hereby  required to receive every such respective entry, and to cause the same to be registered the said office; and afterwards the respective number of every such respective carriage shall be marked on some conspicuous part of the outside  thereof, in large figures, painted, or else shall be put on lead or other metal, and shall be fixed in the front, or on one of the shafts, or some other conspicuous part of every such respective carriage…

There's lots more historical game and fish law in this treatise, but that's all for this week. If anyone knows what fyrets, hays, and so on are, please comment.
Posted by David Schorr at 7:00 AM

Environmental history has been debating its relationship with materialism . Now Chris Tomlins calls for legal history to turn toward the mat...