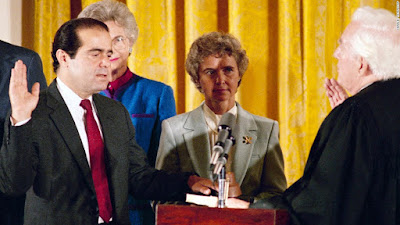 
This essay offers a generally negative appraisal of the significance of Justice Antonin Scalia’s work on the takings issue during his tenure on the Supreme Court. While Justice Scalia was a visible advocate for expanding the scope of regulatory takings doctrine, and his opinion for the Court in Lucas v. South Carolina Coastal Council represents an important precedent, the totality of Scalia’s takings work turned out to be relatively inconsequential. He only authored two majority opinions in takings cases during 30-plus years on the Court. No grand theory motivated his work on the issue, though he was surely sympathetic to the potential for the Takings Clause to constrain the permissible scope of government regulation. Scalia’s substantive contributions to takings jurisprudence are best understood as an effort to elaborate upon the two-part takings test articulated by Justice Lewis Powell in his 1980 opinion for the Court in Agins v. City of Tiburon. The first branch of this test, suggesting that a regulation denying economically viable use of property necessarily represents a taking, blossomed into the Lucas decision; though undeniably important, Lucas has turned out to have a relatively narrow scope. The second branch of the Agins test, suggesting that a regulation results in a taking if it fails to substantially advance a legitimate governmental interest, was repudiated by a unanimous Supreme Court, including Scalia himself, in the 2005 decision in Lingle v. Chevron USA Inc.

For more on Scalia and takings, see here.
Posted by David Schorr at 4:58 PM