Over at Legal Planet Dan Farber recently blogged on "The Truth About Environmental Originalism". Farber writes:

In fact, some of the key provisions of our environmental laws preclude consideration of cost or even technological feasibility. For instance, the Clean Air Act requires EPA to set national air quality standards based entirely on possible risks to public health – and “with an adequate margin of safety.” As Justice Scalia himself was forced to admit in Whitman v. American Trucking Ass’n, the statute “unambiguously bars cost considerations.” In fact, he said in a footnote, EPA would be reversed in court there was proof that it secretly did take cost into account. (Pruitt might want to take note of this, given the number of leaks from the government these days.) As Scalia also recognized, these cost-oblivious air quality standards are the linchpin of the Clean Air Act.

This is not the only statutory provision that ignores costs. The Endangered Species Act prohibits agencies from jeopardizing the survival of species in absolute terms, with only a rarely used exception for extraordinary cases, requiring approval by a special cabinet-level committee. OSHA requires that standards for toxic chemicals in the workplace be set to eliminate any significant risk to workers, unless doing so would bankrupt the industry.

It’s important to recognize that the federal environmental laws were passed in a time of remarkable public ferment over the environment. Don’t forget this was the era of the first Earth Day, of Rachel Carson’s Silent Spring, and of a public shocked by a fire on the Cuyahoga River and the Love Canal toxic dump. As I discuss in a recent paper, even arch-conservatives like Barry Goldwater and William F. Buckley were calling for much stricter pollution control. The public today remains broadly supportive of environmental regulation but the issue is no longer a top priority for most people. But it was an urgent priority in the 1970s when these laws were passed. The original intent was about as far away from current Republican views as humanly possible. If they could see that Scott Pruitt had become head of the EPA, the framers of these laws would have been appalled. 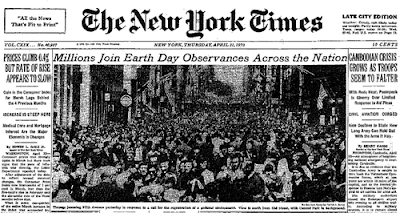