According to Michael McGuire at This Day in Water History, today is the 116th anniversary of US Vice President Garrett Hobart's death. McGuire writes:


While much is known about Hobart’s role as vice president (1897-99), his role in the formation of private water companies and his support of these companies through legislation is less well known. Hobart was elected to the New Jersey Assembly and Senate during the early part of his career. During the 1870s and 1880s there was a lot of legislative activity that appeared to be for the benefit of private water companies. 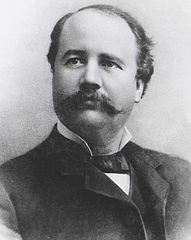 In 1881, one bill that was introduced by Garret A. Hobart, then a state senator, was designed to give private water companies the power to acquire and distribute water resources independent of municipal or state control.  While not explicitly stated, the bill purportedly had a single intention of giving one company, the Passaic Water Company, more power to access water supplies to prevent water shortages at the factories of Paterson which were forced to idle production in the summer season.

The bill was not successful, which was undoubtedly due in part to the widespread suspicion that the bill would grant powers to companies to export New Jersey water supplies to New York.  “[New York speculators] have been attracted by the magnificence and extent of New Jersey’s water-shed, and by the sweetness and purity of its waters.  Last year’s scheme was said to be intended to enable the tapping of New Jersey’s hills for the New York supply.”

Hobart was a resident of Paterson, New Jersey for most of his life. In 1885, Garret A. Hobart joined the Board of the Passaic Water Company and two years later was elected President of the Company.  Hobart was described in one source as representing a syndicate of New York capitalists. The company had been supplying Paterson and the surrounding area since 1857.

The East Jersey Water Company was formed on August 1, 1889 for the stated purpose of supplying Newark, New Jersey with a safe water supply.  All of the men who were shareholders of the new company (including Hobart) were identified with the Lehigh Valley Railroad Company. However, the company’s vision extended far beyond a water supply for Newark. The company began as a confidential syndicate composed of businessmen who were interested in executing grand plans for water supply in northern New Jersey and New York City. Nothing came of these grand plans.

For more, including omitted citations, see the blog.
Posted by David Schorr at 10:09 PM