American Energy Policy in the 1970s, edited by Robert Lifset (U. Oklahoma Press, 2014), was recently reviewed by Peter Grossman in Environmental History and by Fredric Quivik in Business History Review. Grossman is critical:


In general the book seems to be stuck in the 1970s in the same way current policymakers are stuck. It is a major lapse that there is not a careful reflection on the assumptions behind the policies proposed and enacted during the period. Nowhere is there a discussion of the neo-Malthusian mindset that underlay much of the thinking of members of both parties and led to policies such as the enormous synthetic fuels program that were based on forecasts that seemed to fit the facts but turned out to be simply absurd. 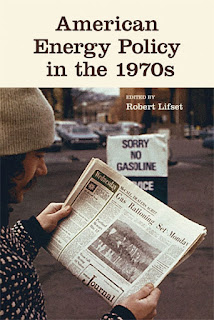 Nor does there seem to be an appreciation of the conditions under which policy action was undertaken. Political leaders on both sides, as Jay Hakes argues correctly in his essay, often agreed on the need for aggressive policies—even when they disagreed on what precisely those policies should be. But the most radical legislation was enacted in a state of near panic in which the sense of national crisis was all pervasive. As policymakers, members of Congress and officials of the Nixon, Ford, and Carter administrations needed to be seen as “doing something” about a problem that was so deeply afflicting the general public (but which neither the public nor the policymakers actually understood). In the summer of 1979, for example, legislators were said to be afraid to go back to their districts for the July 4 holiday because of voter anger, and they were said to be ready to vote for any legislation that promised a solution “even if its [sic] wrong.”

There are other curiously 1970s-blindered claims. It is at least suggested that the United States missed a great opportunity to develop alcohol fuels—called gasohol then, ethanol, today—but the ethanol program made no sense, then or now. In fact, in 1978 the Department of Agriculture produced a report that ethanol would have a negative energy balance—more energy would be needed as an input than would be produced as output—and that it would raise food prices. Ronald Reagan, who often seems a bad guy in the story for killing some of these programs, did not end gasohol and synfuels because they were passed by Democrats, but rather because they made no economic sense in the 1980s and in fact never did unless you accepted the gloomy Malthusian vision especially prevalent in the Carter administration.

The most pertinent observation in the book is that of historian Joseph A. Pratt, which is noted only in passing. Pratt is quoted to the effect that a political system like that of the United States is “uniquely ill-suited to handle energy policy.” That seems an irreducible constraint on the kind of activist (often grandiose) energy undertakings of the 1970s and an issue that should have had a much larger place in these essays.


Yanek Mieczkowski, whose 2005 book explores the Ford presidency more broadly, provides a summary analysis of Ford's efforts—in the wake of the lifting of Eisenhower's imported-oil quotas, Nixon's oil-price restrictions, and the OAPEC oil embargo—to get Congress to develop a comprehensive energy policy, addressing the issue from multiple perspectives, including domestic production, imports, and conservation. Jay Hakes's brief chapter on the Carter administration summarizes some of the new federal initiatives—for example, creating the Department of Energy and providing federal support for new alternative sources of energy—that Carter implemented, before several of them were reversed by the Reagan administration in the 1980s.

The third section, on supply, is the broadest in scope, with chapters exploring several facets of the federal government's efforts to increase and diversify energy supplies. Tyler Priest's chapter focuses on Shell Oil's move into deepwater drilling in the 1970s and its accompanying lobbying of the federal government to loosen offshore leasing programs, leading to a new federal leasing system introduced in the early 1980s and a huge increase in deepwater drilling in the 1990s. Bruce Beaubouef analyzes lessons the government learned in the 1970s using the Strategic Petroleum Reserve as a tool in responding to recurring energy crises, especially as a means to protect consumers (marking a shift away from protecting producers), in an era in which the United States could no longer rely on its own supplies to satisfy domestic demand for oil. The 1970s saw the beginning of major efforts by the federal government to encourage development of alternative energy sources. Jason Theriot focuses on ethanol, arguing that the federal government was ill suited to engage the complexity and long-term changes inherent in the business of developing an alternative source like alcohol fuels. Jeff Womack analyzes a panacea briefly explored by NASA: solar-powered satellites that could beam energy to users anywhere on Earth. The last chapter in the section addresses nuclear power. The oil crises of the 1970s contributed to continuing advocacy for greater reliance on nuclear power. Yet, as Samuel Walker shows, opposition to nuclear power grew through the decade, especially due to public concerns over safety. As a consequence, the federal government licensed no new nuclear power plants from 1978 until 2012.