Following Part I of this series, today I take up art and the conditions of environmental law.

A survey of paintings and other works of art from Western Europe and North American reveals that air pollution was a salient fact in the pre-1970 industrialized West. This point, while basic, is not trivial, as one might have imagined that the relative lack of advanced legislation in this area was due to clean skies, or at least to a lack of awareness of the problem. Yet it is clear that artists from Turner to the French Impressionists and on through the American Works Progress Administration were fascinated by air pollution. The aesthetics and politics of this fascination will be explored later; at this point it will suffice to demonstrate its prevalence. 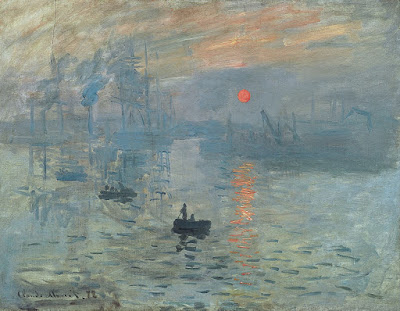 A good place to start is the French Impressionists. Though associated today with paintings in and of nature, they were strongly attracted to scenes of industrialization and modernizing landscapes. The movement was named after Claude Monet’s Impression, soleil levant (1872-73, right), a painting relevant to our topic. The rising sun is indeed prominent in this landscape of Le Havre harbor, but the left side of the painting is dominated by smoke-belching smokestacks and their reflections in the water. Their activity suggests that the gray “mist” enshrouding the rising sun and streaked through the sky above and to the right is in fact the product of air pollution, not morning mists or the artist’s hazily romantic vision. 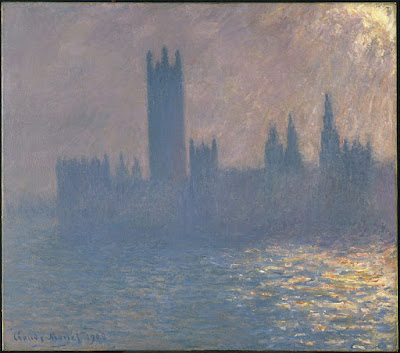 Many of Monet’s other paintings feature air pollution as well. His paintings of London typically feature chimneys and smokestacks spewing thick clouds of smoke into the air of a city covered in a thick layer of air pollution (often denoted “fog” in the works’ titles). Perhaps most striking are the paintings purporting to be studies of the effect of sunlight on the thick London air; the reference to sunlight in the names of these paintings seems almost ironic. In Le Parlement, effet de soleil (1903, left), for instance, the sunlight indeed plays upon the Thames on the right of the picture, yet in the overall composition the sun’s rays are overwhelmed by the thick, polluted air, much as they are in other paintings in the Houses of Parliament series.

Dickens provides a literary counterpart to Monet’s paintings of London’s air pollution in the opening of Bleak House:


London. Michaelmas term lately over, and the Lord Chancellor sitting in Lincoln’s Inn Hall. Implacable November weather. . . . Smoke lowering down from chimney-pots, making a soft black drizzle, with flakes of soot in it as big as full-grown snowflakes—gone into mourning, one might imagine, for the death of the sun . . . .

Fog everywhere. Fog up the river, where it flows among green aits and meadows; fog down the river, where it rolls defiled among the tiers of shipping and the waterside pollutions of a great (and dirty) city. Fog on the Essex marshes, fog on the Kentish heights. Fog creeping into the cabooses of collier-brigs; fog lying out on the yards and hovering in the rigging of great ships; fog drooping on the gunwales of barges and small boats. Fog in the eyes and throats of ancient Greenwich pensioners, wheezing by the firesides of their wards; fog in the stem and bowl of the afternoon pipe of the wrathful skipper, down in his close cabin; fog cruelly pinching the toes and fingers of his shivering little ’prentice boy on deck. Chance people on the bridges peeping over the parapets into a nether sky of fog, with fog all round them, as if they were up in a balloon and hanging in the misty clouds.

Gas looming through the fog in divers places in the streets, much as the sun may, from the spongey fields, be seen to loom by husbandman and ploughboy. Most of the shops lighted two hours before their time—as the gas seems to know, for it has a haggard and unwilling look. 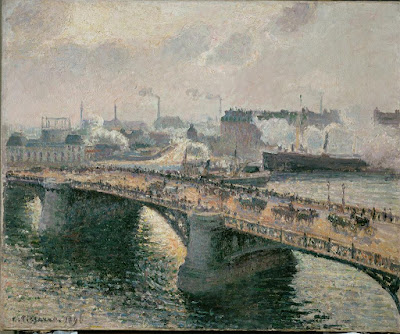 Monet’s aforementioned Impression, with its sun rising over Le Havre harbor, was only one of several depictions by him of air pollution at this site.  His contemporaries were also drawn to the industrialized landscapes of the Channel ports. Pissarro was a prolific painter of polluting sources and air pollution in the Channel ports, especially Rouen. In Le Pont Boieldieu à Rouen, soleil couchant, temps brumeux (1896, right), for instance, smoke has a dominant presence: smoking steamships, smoking locomotives, tall chimneys belching black plumes, ominous clouds of pollution, and over it all a gloomy pall; so much so that the sunset of the title is hardly felt. 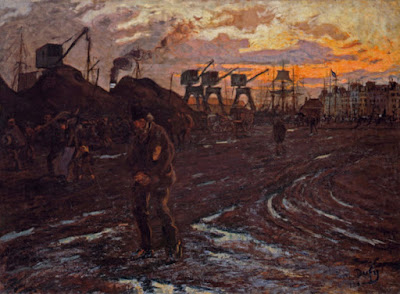 Raoul Dufy’s early Fin du journée au Havre (1901, right), with its realist depiction of tired workers in an industrial wasteland of mud, coal heaps, and smoke, is a far cry from the bright and colorful scenes usually associated with the artist. It is perhaps necessary to keep this painting in mind when trying to make sense of the smoky mists on the margins of his otherwise gay Le Yacht pavoisé au Havre (c. 1905, below), painted when he had moved on to a Fauvist style.

More on the Impressionists, soon, in Part III. (Oscar Wilde makes an appearance, too.) For the full series, see here. For the full article, see here. 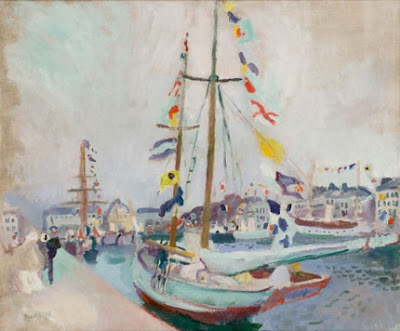