Property and the Appalachian Trail

Maybe some of you are out hiking right now. When you get back you may want to read Sarah Mittlefehldt's Tangled Roots: The Appalachian Trail and American Environmental Politics (U Washington Press, 2014), reviewed in January's Environmental History by Margaret Brown. Brown writes: 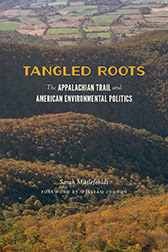 The Appalachian Trail (AT) is a remarkable story of volunteerism because in the early years no government agencies were involved in its creation and maintenance. Local hiking clubs sought permission of landowners to develop the trail and negotiated the rough terrain of property rights. “The AT maintainer had to be one-third trail worker, one-third organizer of other trail workers, but one-third diplomat among the landowners” (p. 38). Not until 1945 was a bill proposed to incorporate the AT under federal authority, and it took the 1968 National Trails Act to create the concept of a distinct corridor of protected landscape under the care of state agencies, the US Forest Service, and the National Park Service. According to Mittlefehldt, the 1968 law did not simplify the story of the AT; rather, it polarized landowners because the protected corridor required additional takings at the same time that the Sagebrush Rebellion and the property rights movement were gathering momentum. The conflict between environmentalism and property rights resulted in the unique contemporary position of the trail: the entire management of the AT was given in 1984 to a nongovernmental nonprofit—the Appalachian Trail Conservancy (ATC)—with both a professional staff and a prodigious number of volunteers.