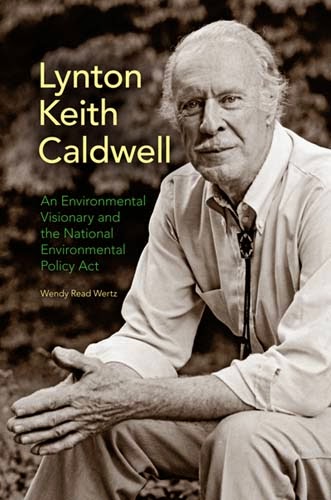 As author Wendy Read Wertz rightly asserts, political scientist and environmental activist Lynton Keith Caldwell’s remarkable contributions to the development of the modern environmental movement have gone largely unrecognized—and this constitutes a grave omission. Based at Indiana University for most of his career, Caldwell, whose wide-ranging work over a long career in public administration, environmental studies, and environmental policy advocacy produced a bibliography of work some fifty-four pages in length (p. 398), has been referred to by many as the father of interdisciplinary environmental studies. Long before most, Caldwell understood that to craft effective environmental policy, policymakers must be trained to understand and appreciate the ecological world surrounding them. Public administration skills must be joined with scientific and even philosophical understanding of the planet as an integrated whole. Caldwell’s expertise in both public administration and environmental policy brought him into a position of international influence, and he traveled widely both to conduct training and to advocate for his systematic ecological vision. Domestically, his achievements include the creation of an interdisciplinary school of environmental studies at Indiana University and, perhaps most notable, a leading role in drafting the National Environmental Policy Act (NEPA) of 1969.

Wertz has given a signal service in providing the field with a resource through which we can learn about this remarkable scholar. Her coverage of the NEPA, often regarded as the “Magna Carta” of U.S. environmental policy, is deeply insightful—though..., depending on the audience, further editing could have been useful. The field of environmental policy is richer for this addition. Serious scholars of NEPA, Caldwell, or environmental studies will find this volume a wonderful resource. More casual readers should bear in mind that some skimming may be required.