Indian environmentalism has, for the most part, been about social justice. During the 1970s and 1980s, it was concerned with differential access to natural assets and ecosystem services. The Bhopal Gas Disaster of 1984 raised new issues, pertaining to industrial risk and safety. This article traces the history of environmental justice from the 1970s onward. It describes the perspective of Indira Gandhi, India's Prime Minister from 1967 to 1984, and her attempts at reconciling the environment with development and economic justice; discusses the emergence of a red-green environmentalism during the 1980s and 90s; and explores Bhopal and its implications; before addressing the issues that are front and center today, in the early twenty-first century.

The article has some trenchant quotes from Indira Gandhi's speech, "Man and Environment", at the United Nations Conference on Human Environment at Stockholm in 1972. Here's one: 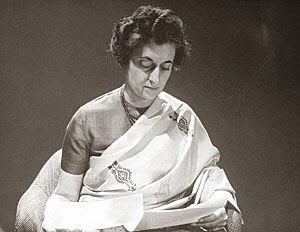 The extreme forms in which questions of population or environmental pollution are posed, obscure the total view of political, economic and social situations…It is an over-simplification to blame all the world's problems on increasing population. Countries with but a small fraction of the world population consume the bulk of the world's production of minerals, fossil fuels and so on. Thus we see that when it comes to the depletion of natural resources and environmental pollution, the increase of one inhabitant in an affluent country, at his level of living, is equivalent to an increase of many Asian, Africans or Latin Americans at their current material levels of living…All the “isms” of the modern age—even those which in theory disown the private profit principle—assume that man's cardinal interest is acquisition. The profit motive, individual or collectives, seems to overshadow all else. This overriding concern with self and today is the basic cause of the ecological crisis.


Indira Gandhi's Stockholm speech was not just a one-off rhetorical flourish in an international forum. It also came to signify the codification of India's approach to development in the second half of the twentieth century. The essence of this approach was that India would strive to harness its natural resources, and invest in modern technology to raise the quality of economic life of the average person. At the same time, efforts would also be made to conserve the environment and preserve its vital forces. Indira Gandhi recognized that there were many shades of gray, and that this grand strategy was easier to talk about rhetorically than implement in practice. For example, she grappled with the consequences of development upon India's tribal peoples and their cultures, only to reconcile the inevitability of development. Again, despite her vehement critique of Western population control advocates, she ended up presiding over an extremely coercive, government-sponsored, forced sterilization program. She lamented the increasing monocultures that resulted with the pursuit of industrial forestry by the government's own forest department but appeared frustrated that her own government did not heed her concerns. In many speeches she repeated the argument in Stockholm that Western industrialism was not a paradigm for countries like India; and articulated the need for balance and alternatives, including, for example, appropriate technology and renewable energy. Yet, she offered no concrete alternatives or pathways for environmental governance.