The latest issues of Law and History Review and Environmental History both review Jennifer Anderson's Mahogany: The Costs of Luxury in Early America (Harvard UP, 2012). The reviews highlight the way the interaction of environmental history and legal history can shed light on wider topics such as labor, slavery, and empire. 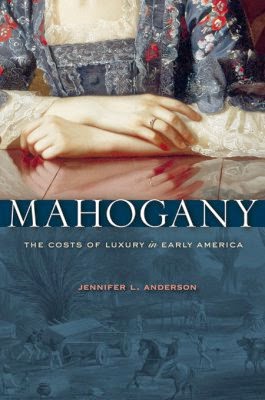 Jeffrey Kosiorek in EH emphasizes the importance of environmental history for the wider social and economic history:


Anderson recognizes throughout that the cultural value of mahogany and its social, political, and economic importance through history cannot be separated from the ecological realities of the trees and the ecosystem they inhabit. For instance, the rich beauty, durability, and size of the wood that made it so desirable is itself a product of the tree’s tropical environment where it grows year-round leaving tightly packed, indiscernible growth rings. Widely dispersed amid many other species, harvesting mahogany not only resulted in deforestation, but it also allowed slaves a degree of autonomy and local knowledge that they could use to gain their freedom. Likewise, the trees’ limited range set off a scramble to control its territory among European powers and individual speculators.And, as extractors depleted the choicest trees, smaller, inconsistent mahogany lumber came on the market, causing a shift in consumers’ taste and understanding of the wood.

Zachary Dorner's review in LHR has more of a legal emphasis:

North American consumers had embraced mahogany as a luxury by the 1760s.... The 1721 Naval Stores Act accelerated the existing economic and social trends of the consumer revolution to create a market for mahogany. Consumption, however, remained inextricably tied to expanding plantation agriculture in the Caribbean. As land exhaustion and deforestation limited Jamaican mahogany supplies by the 1770s, competition intensiﬁed over remaining timber resources. The collapse of sustainable tropical forestry spurred the British Land Commissioners to impose policies of land privatization and forest preservation in the Caribbean that increasingly displaced local inhabitants, often by force, from their native lands and ways of life. The British search for alternative sources of mahogany strengthened long-distance imperial infrastructure, but simultaneously heightened the uncertainties associated with extending trade into new territory. Many of those involved in this search around the circum-Caribbean also participated in the transatlantic slave trade, furthering the close relationship between enslaved labor and mahogany production.... Anderson demonstrates how logging practices at once shaped the character of slavery and daily life in the Honduras Bay settlement, and inﬂuenced the commercial calculations of merchants in Rhode Island.