Aboriginals and Métis in Rupert's Land

July's Environmental History has a review by Neil S. Forkey of Civilizing the Wilderness: Culture and Nature in Pre-Confederation Canada and Rupert’s Land (U Alberta Press, 2012) by A.A. den Otter. The book apparently treats legal issues in at least one instance, as Forkey writes: 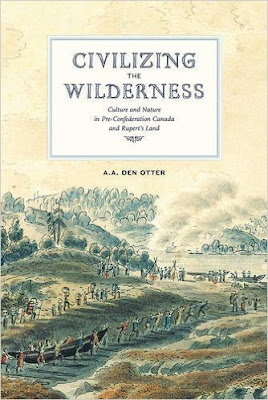 The strength of the collection lies in its highlighting of Aboriginals and the Métis as integral to the manifold changes of the period. Den Otter skillfully demonstrates that far from resisting some of the encroachments brought by contact with the Hudson’s Bay Company, which conducted a trade in furs, or with the burgeoning Canadian state, the Métis were willing (on their own terms) to embrace certain elements of progress. The best illustration of this is his reexamination of the 1849 (Pierre-Guillaume) Sayer Trial, in which four Métis traders were charged with breaching the HBC’s trade monopoly. The men were found guilty but released on the grounds of mercy. The over two hundred Métis encamped outside the court building erupted in cheers, in what den Otter concludes was vindication for those seeking access to more lucrative American markets so as to improve the quality of their lives. Free trade, an example of progress, was what the Métis wanted.