Nobel Prize-winning economist and law school professor Ronald Coase passed away earlier this month at the age of 102. 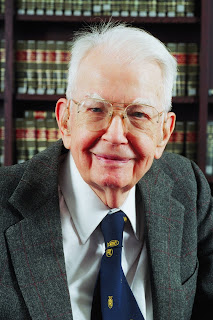 Coase's 1960 article, "The Problem of Social Cost", the most-cited law review article of all time, had an immense effect on both the study of environmental law and its design, providing intellectual backing for two prominent trends in environmental law of the last few decades: market-based policies and cost-benefit analysis. As Cass Sunstein explains:


His target was the great British economist Arthur Cecil Pigou, who contended that if a polluter is emitting smoke, and thus causing injury, the best response is to make the factory owner pay for the injury or to impose a corrective tax.

Coase said Pigou failed to see “the reciprocal nature of the problem.” Suppose that a very noisy factory is causing legal injury to a doctor operating next door. Under Pigou’s approach, the factory should be required to pay damages to the doctor. But Coase pointed out that we could also make the doctor bear the cost. His central insight was that if people can bargain with one another, and if it isn’t costly for them to do so, it just doesn’t matter who is required to pay: People will negotiate their way to the efficient solution. This is the Coase theorem in a nutshell.

Here’s the basic idea: Suppose that under the law, the factory has to pay damages to the doctor. If the doctor can avoid injury by moving his office a few blocks away, and if he can do that cheaply, the factory will pay him to move, and that’s what he’ll do.

Now suppose that under the law, the doctor bears the cost. If he can avoid injury by moving his office a few blocks away, that’s what he’ll do. The legal rule won’t affect the outcome. The example is perfectly generalizable. The same analysis holds whenever people are harming each other (but are in a position to bargain).

Coase recognized, of course, that it will often be costly for people to negotiate with one another. If a factory emits pollution that affects thousands of people, a bargain is unlikely. Coase’s analysis suggests that when people can’t negotiate, policy makers should try to identify the agreement they would reach if they had been able to do so. To identify that agreement, they have to analyze the benefits and costs of the harm-producing activity. Coase emphasized that “all solutions have costs and there is no reason to suppose that government regulation is called for simply because the problem is not well handled by the market or the firm.”