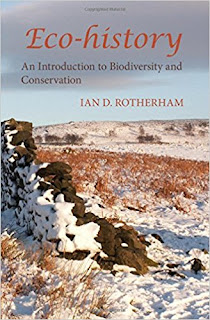 A while back Environmental History carried a review by Daniel Simberloff of Ian Rotherham's Eco-history: An Introduction to Biodiversity and Conservation (White Horse Press, 2014). Simberloff notes:


The high point of Eco-history is a remarkable 42-page “Timeline,” detailing in linear fashion 224 key points in the history of British nature conservation from AD 1000 to 2000: laws especially, but also extinctions, introductions, establishment of nature reserves and environmental organizations. Rotherham concisely lists the impacts of each event, with further explication for about half of them. This section alone could be published as a short book that almost any environmental historian would value.

I don't think they're related, but there's also a very elaborate website called "Environmental history timeline", itself packed with little known nuggets of environmental-legal history, such as the fact that in 1970 US President Richard Nixon "issued an executive order... requiring industries to obtain a federal permit before dumping wastes into U.S. waterways or face criminal charges. This was the beginning of the US National Pollution Discharge Elimination System (NPDES) permitting process." Or that in 1779


Johann Peter Frank (1745-1821), writes A Complete System of Medical Policy in Germany advocating governmental responsibility for clean water, sewage systems, garbage disposal, food inspection and other health measures under an authoritative “medical police.” This idea was well received and influenced policy in Germany, Italy and other nearby nations. The authoritarian approach did not sit well with the French, British or Americans, where direct government controls developed only in areas of specific problems such as communicable disease and sanitation.

There's a lot more in this timeline, worth perusing and bookmarking.
Posted by David Schorr at 7:00 AM