To mark the 100th anniversary of what New York's 1916 zoning ordinance, arguably the world's first, yesterday's New York Times carried an article by David Dunlap, "Zoning Arrived 100 Years Ago. It Changed New York City Forever." The article argues that it was not the completion in 1915 of the Equitable Building, taking up a whole city block, without setbacks, that was responsible for enactment of the law, as agitation for such regulation had been brewing for some time:


“The time has come when effort should be made to regulate the height, size and arrangement of buildings,” George McAneny, the borough president of Manhattan, declared in a 1913 measure establishing what amounted to a zoning committee.

Regulations, he wrote, were needed “to arrest the seriously increasing evil of the shutting off of light and air from other buildings and from the public streets, to prevent unwholesome and dangerous congestion both in living conditions and in street and transit traffic, and to reduce the hazards of fire and peril to life.”

He and Edward M. Bassett were the chief architects of the 1916 Zoning Resolution.

Under its rules, buildings in strictly residential zones were permitted to rise only as high as the streets in front of them were wide; a ratio of one to one, put another way. (Side streets in Manhattan are typically 60 feet wide.)

These “1” zones cover most of the oversized maps in a portfolio titled, “Height / July 25, 1916,” that the City Planning Department still keeps. They are relics now, since the 1916 Zoning Resolution was superseded in 1961.

Also visible on the maps are “1¼” zones, “1½” zones, “2” zones and, in Lower Manhattan, a “2½” zone, where buildings could rise without setback for two and a half times the width of the street that they fronted. 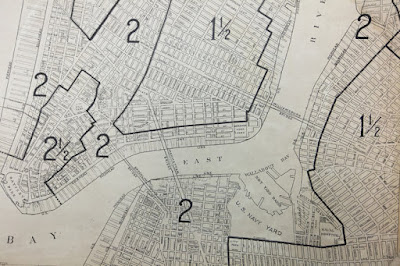 a revolutionary document couched in accepted common-law and constitutional doctrines: that landowners are not entirely free to create nuisances to those around them; and that local governments may police conduct in the name of public health, safety and welfare.

“So much of this was to get the courts to feel comfortable that this was a natural and obvious use of the police power,” Mr. Weisbrod said, “when what it really was a dramatic change.”