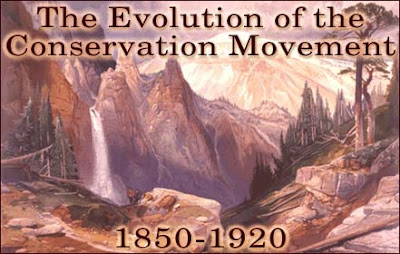 The Library of Congress webpage The Evolution of the Conservation Movement, 1850-1920 has quite a bit of legal material from the period:

There are some unexpected treasures here, for instance Samuel Flagg's 1912 booklet, City Smoke Ordinances and Smoke Abatement, published by the Bureau of Mines (see title page below). The website explains:


Although concern for the effect of human environmental activity on human welfare did not move to the center of what is now called the environmental movement until the 1960s, the turn-of-the-century conservation movement did include something contemporaries referred to as "human conservation:" an attempt to improve the quality and quantity of human life, particularly in the nation's burgeoning urban centers, through attention to certain kinds of environmental management, particularly technological intervention. Within this framework, engineers, scientists and public policy-makers sought to determine how natural resources, such as mineral fuels, could be used with both maximum efficiency and minimal detriment to the human environment. This brief survey by the U.S. Bureau of Mines provides a concise and systematic overview of contemporary anti-air-pollution efforts as reflected in the smoke-abatement ordinances of cities throughout the country, and prescribes the essential characteristics of ordinances appropriate for municipalities of different sizes. An Appendix reprints actual ordinances from Chicago, Pittsburgh, Des Moines, Milwaukee, Los Angeles, and Boston by way of example. It should be noted that the problems caused by urban smoke are defined (p. 8) in terms of economic waste, damage to buildings, loss of light, dirt, and injury to vegetation, but not as a direct threat to human health.

For more environmental law treatises of the period, see here. For more on smoke regulation, see here and here.