Hanri Mostert and Hugo Meyer Van den Berg have posted "Roman-Dutch Law, Custodianship, and the African Subsurface: The South African and Namibian Experiences", a chapter from a forthcoming edited volume on the law of energy underground. From the abstract:


The legal heritage of Southern Africa provides interesting perspectives on the... history and present status of laws governing energy resources in different legal families. Common Law and Civil Law approaches to subsurface resource regulation will be sketched in the [other] contributions [in the book]. The "mixed" legal family to which South Africa, Namibia and Botswana belongs, crosses over the common law/civil law divide; to provide for the regulation of subsurface resources in peculiar and often anomalous ways. The reason for this mix is found in the bipartite colonial history of the region. 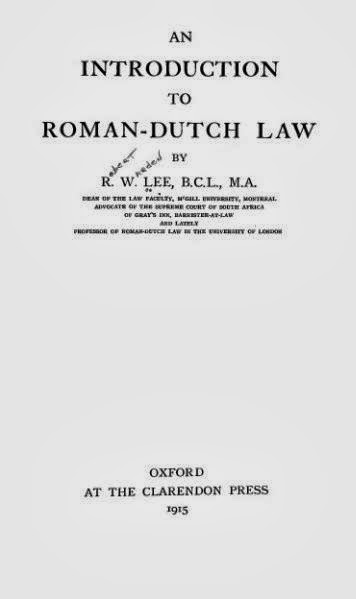 Our contribution is limited to a study of one particular African perspective on subsurface resource regulation: that of Southern Africa. Here the development of a mixed legal tradition has been most pronounced, because of the region’s particular colonial history. In this chapter, we examine the proprietary principles on which the law relating to subsurface regulation is based, referring particularly to differences in the reception of Roman-Dutch law due to different colonial histories. Our main focus is South Africa and Namibia, although we include superficial references to Botswana. In undertaking this analysis, we are particularly interested in the role that legislative regulation and policy changes have played to amend or substitute Roman-Dutch law rules. This line of inquiry may assist in determining whether the peculiar roots of the mixed legal family investigated here remain influential in current law and practice regulating the subsurface.

We contrast the legacy of Roman-Dutch law in South Africa, Namibia and Botswana, discussing basic tenets of subsurface ownership from the Roman-Dutch law perspective, and tracing the influence that colonialism and constitutionalism had on the development of the legal system as it pertains to the subsurface.