More on "The Mortal Sea"

A while back we re-posted George Conk's review of W. Jeffrey Bolster's award-winning The Mortal Sea - Fishing the Atlantic in the Age of Sail (Harvard UP, 2012). Now Environmental History has a review of the book by Michael J. Chiarappa. From the review: 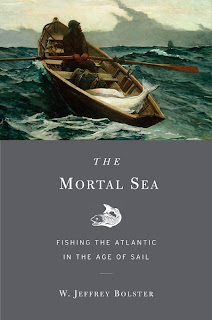 Desiring “to write the ocean into history,” Bolster connects the fate of the northwest Atlantic's ecosystem to critical European antecedents that have not been fully examined in a transatlantic context. Given the depletion that had occurred in their home waters, sixteenth- and seventeenth-century Europeans gradually brought the northwest Atlantic's abundance—indeed, a stark contrast to the Old World's crippled marine ecosystem—into their commercial orbit. As permanent settlement ensued along the New England coastline, fishing effort began restructuring the sea's biomass by targeting species that were within ready reach—anadromous fish, sea mammals, and waterfowl, as well as nearby stocks of cod and mackerel. Sublime abundance, accompanied by a providential mindset, fueled these early use patterns. But Bolster challenges us not to be overly seduced by this narrative, and instead, to consider the rumblings of a nascent precautionary approach among New Englanders who still had Old World depletion fresh in their minds.

The paradox of precautionary sentiment, of wanting to fish but also wanting to preserve fish, runs throughout The Mortal Sea. In the nineteenth century, more efficient harvesting technology sharpened these debates in both tone and substance as signature sea fishes such as cod and mackerel showed stress, along with their forage base, menhaden. In a political and cultural climate that was hardly inclined to deny fishing rights, competing claims and perspectives devolved along various lines, but one loomed large: whose experience, be it small-scale fishermen, scientists, politicians, or capital-intensive fishing firms, would exert authority and be credibly accounted for in reckoning the increasingly complicated environmental politics of the northwest Atlantic?

Seeking to better align our view of these variables, The Mortal Sea takes its place among those studies that problematize the use of common property, a course less directed toward identifying mechanistic exploitation, but rather more intent on dissecting the whirlwind created by the intersection of traditional ecological knowledge, ideologically and economically driven science, the public trust doctrine, and market capitalism. Indeed, it is this dense matrix that dulled, diminished, or deluded the impact of ecological indicators, and leads Bolster to grapple consistently with the epistemological issue of knowing the ocean and the impact of human behavior on it. The northwest Atlantic's marine ecosystem was the loser amid this fragmentation, leading to equally discordant approaches to its compromised biological condition. States became more territorial regarding the use of their waters, prominent scientists—such as Thomas Huxley, Spencer F. Baird, and G. Brown Goode—saw the sea as unrealistically resilient, and new technologies pursued fish with unprecedented efficiency, masking depletion that was well underway. Bolster clarifies just how complicit the scientific community was in mishandling the fisheries resources of the northwest Atlantic, as well as its presumption in thinking it could reengineer stocks and habitats.