Jewish law and the environment 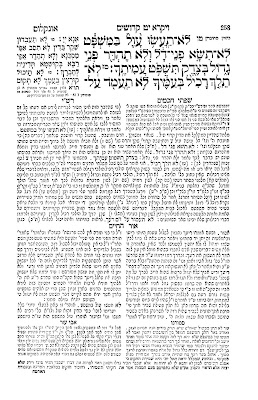 We recently posted on John Nagle's discussion of Lynn White's influential "The Historical Roots of Our Ecologic Crisis", which blamed Christianity for modern environmental problems, and the critiques that have been leveled against it.

Jonathan Zasloff's recent post at Legal Planet, "A New/Old Jewish Environmental Ethic: Don’t Go About Like a Merchant", examines religion and the environment from a new and surprising angle, the relation of Jewish law's prohibition not to "go about like a merchant" (לא תלך רכיל) to environmental issues. Zasloff writes:


To the extent that the לא תלך רכיל injunction is about merchants, it opens up huge vistas to think about environmental ethics.  It most assuredly is not saying that being a merchant is bad; there are literally hundreds of laws, decisions, and ethical commands on the proper conduct of private business.  But instead, what it suggests is that one should not “walk around” or “go out” as a merchant; in other words, one should not apply the rules of private business to spheres where it does not apply.

It’s not hard to see where this is going.  Interpreting the injunction in this way would yield an approach to environmental policymaking that is cautious and conservative in allowing purely economic considerations to dominate the preference for rules.  It’s not bad to act like a merchant, but you shouldn’t walk around doing it.  There are a host of other ways to think about problems: justice, fairness, tradition, equality (not to mention humanity’s relationship with God).  Jamming everything into economic models or cost-benefit calculations violates the injunction.  Note, by the way, how much better the “merchant” interpretation goes with the immediate context: you don’t go about as a merchant because then you consider everyone as things to be added into a calculation, in other words, you would stand idly by the blood of your neighbor.