This past summer I noted that I posted a draft of my "Historical Analysis in Environmental Law" (on SSRN and Academia), forthcoming in the Oxford Handbook of Historical Legal Research, edited by Markus Dubber and Chris Tomlins. I believe there's still some time for modifications, so I'll post a series on it now, and hope some of you will have some helpful comments!

Environmental law has no history. 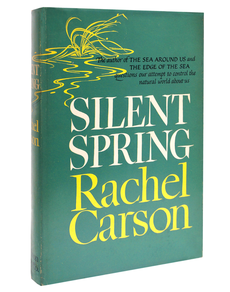 This is not to say environmental law has no past; indeed, scholars are beginning to uncover its historical roots. What I mean by having no history is, first, that there is a general feeling, common to legal historians and environmental lawyers (particularly in the United States), that environmental law is something new under the sun, having emerged in the 1970s from the environmental crises of the preceding decade (such as the Cuyahoga River catching fire) and a contemporaneous sharpening of ecological consciousness (spurred, most prominently, by Rachel Carson's Silent Spring). Modern environmental law lacks of connection both to earlier periods and to the great themes and trends of legal history.

The general view of environmental law's history is that before circa 1970 environmental regulation as we think of it today—a branch of public law in which the regulator sets standards for activities with environmental impacts—was insignificant. Rather, it is taught, the environment was regulated through nuisance law—a system relying on private parties, or sometimes the government, bringing a lawsuit to enjoin environmentally harmful activities or obtain damages for environmental harm: "Prior to the explosion of environmental legislation in the 1970s, the common law was the legal system's primary vehicle for responding to environmental problems.... The common law relied largely on nuisance law doctrines to resolve environmental controversies..." (Percival et al, 63) Some look to this period as a lost golden age; others see it as having been a workable system for its time; while yet others condemn it as a failure.

This view of modern environmental law being created ex nihilo in a moment of crisis is, first and foremost, inherently implausible.
One need only peruse the hundreds of pages of the 1970s-era United States Statutes at Large dedicated to environmental legislation to intuit that the legislators and draftsmen who created the laws, talented as they may have been, did not pull these legal regimes out of thin air. Some of the legal forms, classifications, and terms may have been new, but most were not. (One might also point out that some obvious continuities with earlier law are evident on the face of much of the legislation: The Clean Air Act and Clean Water Act—the centerpieces of the supposedly new American environmental law—were actually officially named the 'Clean Air Amendments of 1970' and the 'Federal Water Pollution Control Act Amendments of 1972', thus signaling their continuity with earlier pollution control law.)

Though a recent wave of research (some of it surveyed in this series of posts) has made progress in exposing some earlier statutory regulation of industrial pollution, this valuable work has yet to make a serious impression on environmental lawyers or legal historians. Moreover, other historical sources of modern environmental law have been almost entirely neglected, certainly by legal historians.

This lack of a felt historical anchor, of a backstory, is of course unfortunate for the historical ignorance it perpetuates, though this is perhaps a matter that primarily concerns academics and antiquarians. What should concern broader circles, I will argue here, is that the lack of a historical sensibility with regard to the field severely impedes understanding of environmental law's form and substance, at the same time leaving a yawning gap in legal histories precisely where one would hope to find engagement with the legal-environmental roots of present challenges.

Environmental law has no history in a second, sense, too; it lacks history as a mode of argument or analysis. Beyond a sea of baroque doctrinal and literature that typifies a field dominated by complex legislation, the primary critical modes of contemporary analysis of environmental law are those of neoclassical economics and two branches of environmental ethics—'environmental justice' and eco-centrism. In legal cultures in which precedent and history are often what make a winning argument, the unavailability of historical analysis as a mode of legal discourse—as it is, for instance, in constitutional and property law (two fields in which environmental legal disputes are often entangled)—means that environmental values often are forced to retreat in the face of others.

For these reasons environmental law needs both heightened historical analysis and a sense of its own historical roots. I aim here to sketch current, possible, and desirable directions for future research into the history of environmental law. Before doing so, I will note, in the next post in the series, a current scholarly pathology.
Posted by David Schorr at 7:00 AM