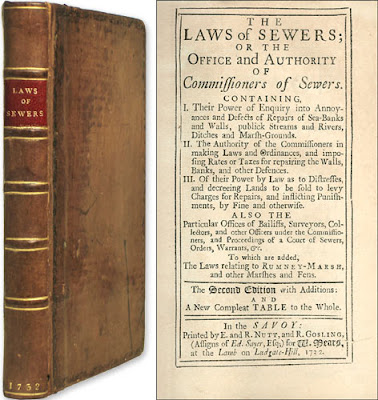 A few months ago we noted some of the environmental dimensions of Philip Hamburger's revisionist account of the history of administrative law. Now Eric Posner points out some contemporary relevance of Hamburger's controversial views (thanks to Legal History Blog for flagging the post, and to Eric for approving the re-post):

Judge Gorsuch has approvingly cited Philip Hamburger’s book, Is Administrative Law Unlawful?, in three opinions.* That is three times the number of opinions citing Hamburger’s book written by all the judges in all the federal circuit courts put together. Is this a matter of significance?

Hamburger argues that “administrative power” is unconstitutional. This is a radical view. I mean a radical view in the sense that, if taken seriously, it would require the invalidation of much of the administrative state. Agencies like EPA and the Fed could continue to exist, but only to gather facts, monitor industry, and bring claims against people and companies based on statutes enacted by Congress. They would not be allowed to issue regulations, that is, rules. Only Congress could do that.

I do not think that this vision is acceptable to the public, or really anyone, not even business, which says that it opposes regulation but in fact depends on it more often than not. But his view is an appealing fantasy, and it has excited the conservative legal community. It’s much easier to say “it’s all unconstitutional” than to explain why this regulation or that one is unwise or illegal.

In rereading Hamburger, I am struck by three themes, which resonate with our political times.

Hamburger is anti-elite. He claims that the rise of executive power created a new elite class, which has displaced the “people,” who enact laws through the legislatures.

Hamburger is anti-foreigner. (Well, he is pro-UK, so call him anti-non-Anglo-American.) The Glorious Revolution ended royal claims to administrative power, but administrative power—which he calls a form of “absolutism”—took refuge on the Continent. He denounces the “Prussification” of American law after American lawyers, partly inspired by German practice, imported administrative lawmaking back into the U.S. at the start of the Progressive Era.

Hamburger is anti-executive. The executive is always tempted to abuse its power, far more than the legislature is.

These claims are all strikingly resonant and rhetorically powerful—especially in the wake of the Obama era, when all these themes came together in the darkest recesses of the reactionary imagination. They are all questionable as well. Legislatures have almost always been controlled by the elites, as have the courts. When populist impulses lead to political power, they usually travel through the executive. The United States had a tradition of administrative lawmaking at the local level, as Hamburger elsewhere notes; reliance on foreign practice was never necessary. In the U.S. experience, most violations of civil liberties in U.S. history required the joint action of Congress and the president. Indeed, the administrative state that Hamburger deplores was created by Congress.
Is Gorsuch a Hamburgerian? I would like to know.

(For some perspective on Hamburger's thesis, see the title page of The Laws of Sewers (2nd ed. 1732, image courtesy of The Lawbook Exchange) above, highlighting the legal powers of the English Commissioners of Sewers, including their "Authority... in making Laws and Ordinances, and imposing Rates or Taxes" and "their Power by Law as to... decreeing Lands to be sold to levy Charges for Repairs, and inflicting Punishments, by Fine and otherwise." The full work is here.)