In search of post-Brexit England 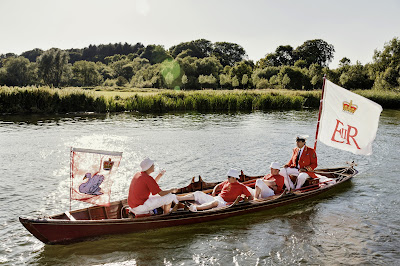 I highly recommend reading a beautiful piece by Helen Macdonald just published in the New York Times Magazine, "In Search of Post-Brexit England, and Swans". The story opens:


In the days after the Brexit vote last year, I became obsessed with an oil painting called “Swan Upping at Cookham” [below, Stanley Spencer, 1915-1919], which portrays a scene from an ancient and colorful English tradition. “Swan Upping” refers to the annual summer voyage of a flotilla of wooden skiffs that sets off from the town of Sunbury-on-Thames on a five-day journey to catch all the swans on the upper reaches of the River Thames. The crews check the parentage of young birds and place a mark on them to claim their ownership: Some belong to the queen, others to the Worshipful Company of Vintners and the Worshipful Company of Dyers, two ancient trade guilds based in the City of London. The painting depicts a traditional stop on the uppers’ trip. Here is the river and the Ferry Inn, wooden punts, moody clouds, women carrying cushions, a fretted iron bridge and a swan bound and hoisted in coils of rope and canvas, white neck craning from a man’s shoulder. 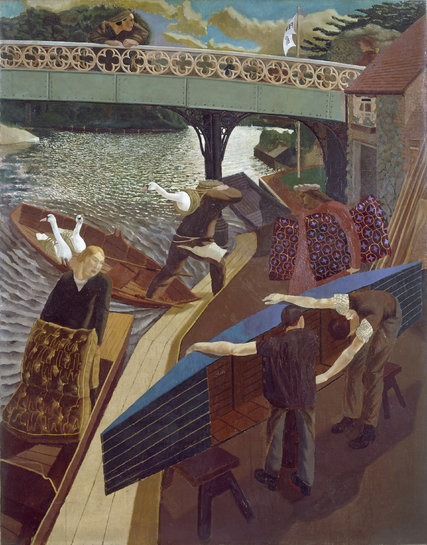 After some interesting background on the painting and on the place of these swans in English national mythology, Macdonald explains more about the legal historical background of the "upping":


Swans’ royal ownership dates at least to the 12th century, and certain flocks — known traditionally as games of swans — were granted by royal charter to hundreds of favored dignitaries and institutions. All the young swans in the country were once upped each summer, the last joint of one wing cut away to render them flightless, and patterns incised in their bills or webbed feet to establish ownership. Exquisitely inked manuscript records of these marks still exist: lines and crosses scribed across diagrammatic beaks. As geese and turkeys became popular eating — less territorial than swans, they were much easier to keep — ownership of swan flocks reverted to the crown in all but a few locations, like the Thames.

After a beautiful meditation on her journey up the Thames, Macdonald concludes with some important thoughts on nationalism, tradition, and the new era we have entered:


Heritage traditions like swan upping have clear conceptual value for nationalists; they promote a sense of seamless historical continuity that works to erase differences between past and present, burnishing an illusion of unchanging Englishness. But remembering [a story about the artist Spencer recounted in the article] made me wonder if swan upping could offer us something other than these exclusionist dreams of a sacrosanct Englishness deep-rooted in an imagined past. For besides the pageantry, what I had watched that day was a beautiful display of expert animal handling and river knowledge. Skiffs crewed by men who know how to row, how to navigate complicated waters, how to catch swans, how to corral them, how to deal with a bird the size of a dog with a flexible neck and wings that can break ribs.

These are craft knowledges, ones learned by apprenticeship, not from books, and universal in the very nature of their specificity.... [T]hey are global by virtue of being local and cannot easily be fitted to simple stories of race and nationality, of us and them. Later that evening, watching a full moon rise through air thick with the scent of lime blossom, I thought of how there are always counternarratives, hidden voices, lost lives, other ways of being, and how it is possible to see a different, more inclusive England in the most recondite of traditions. And I cherished the thought that grand historical and political narratives might falter, just slightly, in the face of skillful interactions with things that are not us. Small things. Swans, rivers, boats, currents, knotted loops of braided cotton string.