Ecology and procedure in the history of ecosystem management

A while ago we noted a review of James Skillen's book on the US Bureau of Land Management. Now American Historical Review has a review by Leisl Carr Childers of Skillen's latest book, Federal Ecosystem Management: Its Rise, Fall, and Afterlife (University Press of Kansas, 2015). Childers writes: 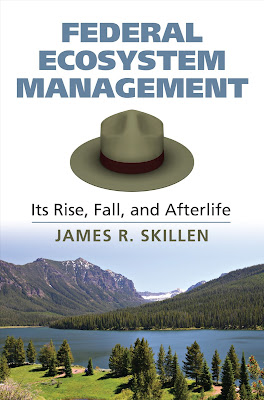 Divided into two parts and featuring three case studies, Federal Ecosystem Management examines the historical contexts of ecological science and public administration from which ecosystem management emerged in the 1960s and 1970s and analyzes its implementation during the George H. W. Bush and William J. Clinton presidential administrations. According to Skillen, the National Environmental Policy Act (NEPA, 1969) and the Endangered Species Act (ESA, 1973) formed the cornerstones of ecosystem management. These legislative mandates did not systematize ecosystem management; rather, they allowed federal land management agencies to implement two competing versions of the paradigm. Ecosystem management, undergirded by the ESA, focused on achieving substantive goals that married ecosystem protection with resource development and provided a dynamic process through which land managers could respond to the constantly shifting complex of ecological systems by continually adapting their management plans to reach a specific goal. In contrast, ecosystem management relied on NEPA and concentrated on achieving procedural goals by using scientific assessment and open, democratic deliberation. In this version, gathering scientific information and using public input to shape management decisions continued to ensure sustained yield in natural resource development.

Yet without a clear legislative mandate to guide the process, the application of both versions of ecosystem management was as varied as the missions and cultures of the land management agencies that employed them. In case studies on the Greater Yellowstone Ecosystem, where the Forest Service and National Park Service first attempted collaborative projects that utilized the paradigm, and the Northwest Forest Plan and the Interior Columbia Basin Ecosystem Management Project, which emphasized the substantive and procedural versions of the paradigm respectively, Skillen deftly demonstrates the political difficulties surrounding the actual implementation of ecosystem management. In no context was either version of the paradigm truly operational, and the tension between the two variations has perpetrated increasing political polarization. Nevertheless, Skillen leaves readers with the sense that despite its failure, the basic tenants of ecosystem management remain.