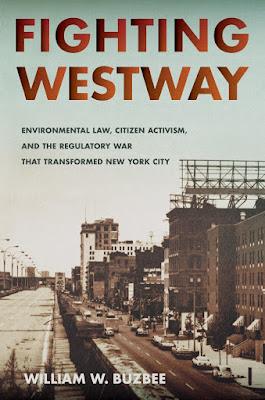 In 1973 portions of an elevated highway on Manhattan’s West Side collapsed. A powerful coalition of local business, real estate, and government leaders proposed Westway, a four-mile long, six-lane, underground highway, built entirely on landfill. The project included parks and new space for real estate development; federal highway funds would pay 90 percent of construction costs. But Westway was never built. The Army Corps of Engineers approved landfill for Westway but only after ignoring evidence that Westway would devastate Hudson River striped bass. In 1985 after a federal court excoriated the Army Corps and enjoined the landfill, New York City officials “traded in” the proposed highway for a modest surface road, riverside bike path, and over a billion dollars for mass transit. In New York, Westway remains a symbol of antidemocratic overreach (for opponents) or excessive regulation (for proponents). As environmental history, the “regulatory war” over Westway reveals how the Clean Water Act (CWA), Clean Air Act (CAA) and National Environmental Protection Act (NEPA) transformed regulatory and environmental politics in the late twentieth century.

When the New York State Urban Development Corporation proposed Westway, most New Yorkers assumed that the shallow waters slated for landfill were a biological wasteland. The Army Corps of Engineers’ first draft Environmental Impact Statement (EIS) on Westway landfill concluded that the area was so polluted that filling it would have no negative ecological consequences. The Environmental Protection Agency and other natural resource offices contested this, but the 1977 final EIS asserted the biological wasteland theory even more strongly. When a storm of protest forced the Army Corps to reexamine the ecology of the areas slated for landfill, preliminary results showed that these areas were vitally important habitat for young striped bass. The Army Corps cut the fish survey short and granted the permit for Westway landfill in violation of the CWA. Opponents sued. Court testimony revealed that the Army Corps manipulated and ignored the results of fish studies, and made no effort to explain why their final EIS insisted that Westway would have no adverse effects when the evidence clearly showed it would.

Buzbee provides an excellent explanation of regulatory processes and the limitations of both the CAA and NEPA. He explains “regulatory war,” court procedures, legal standing, the requirements and strengths of specific environmental regulations, and other critical features of environmental policymaking. His biographies of key players demonstrate how expertise and political connections contributed to the Westway controversy. But the real heart of the book is Buzbee’s able and compelling explanation of the legal strategy, evidence, and reasoning behind the Westway verdicts. So the Westway story is a sound case study of the impact of local priorities on federal policies, and environmental regulations on federal agencies like the Army Corps. Buzbee does engage opponents’ arguments and strategy with more nuance and detail than he does Westway’s supporters. His insistence that the outcome was not inevitable does not seem all that important in the face of this careful legal and regulatory history. These are small faults in a very interesting book that is exceptionally well suited to undergraduate courses on environmental law and politics. Fighting Westway may not do precisely what Buzbee says it does, but it will give readers a clear understanding of how regulations work, how government institutions interact, and why it can be so difficult to stop a big project once it is underway.