In a new study that traces the relationship between land use and politics not in the South, but in the North, Adam Wesley Dean sets out to challenge the common notion that the war was a conflict between an urban, industrial North and an agrarian South. To do so, Dean looks to the ideology of the Republican Party. The author argues that Republican ideology was “fundamentally agrarian” and shaped by “an environmental understanding of social development” (pp. 2–3). Dean convincingly demonstrates how beliefs about the tenuous relationship between soil and civilization were at the heart of the Grand Old Party’s ideology..... 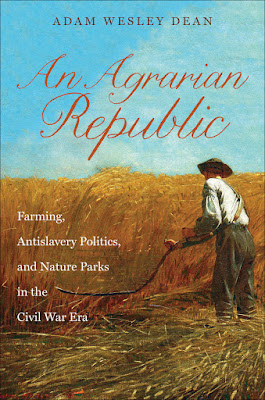 The first three chapters follow the strand of agrarian thought in American politics from the Northwest Ordinance through the landmark wartime legislation of the Homestead Act, the Morrill Act, and the Pacific Railroad Act. Dean argues that Republicans defined themselves in opposition to the extensive agriculture of the South, where observers like Frederick Law Olmstead cited soil erosion as physical evidence of the moral decay inflicted by slavery. But Dean goes beyond the North-South dichotomy and also moves along the East-West axis to triangulate the centrality of land use to Republican discourse....

The final two chapters take an abrupt turn to postwar debates about park creation in Yosemite and Yellowstone, and then to settlement policies in the South and among Native Americans out West. While these subjects might seem like a detour from earlier chapters, they lead to the book’s most original contributions. One of the more surprising findings relates to the creation of national parks. The conservation question drove a wedge within the party between those who believed that natural beauty could nourish republican virtues and old Free-Soilers who believed that all land—even Yosemite and Yellowstone—should be divided into small farms. The final chapter examines how agrarian thought shaped policy intended to bring freed people and Natives Americans into the national fold after the war. Some readers might take issue with the provocative claim that Republicans “had an environmental view of citizenship,” but Dean makes a strong case that the ideology of soil and civilization hewn in the congressional turmoil in the 1850s helped structure postwar Republican policies in distant regions, long after war’s end (p. 136).