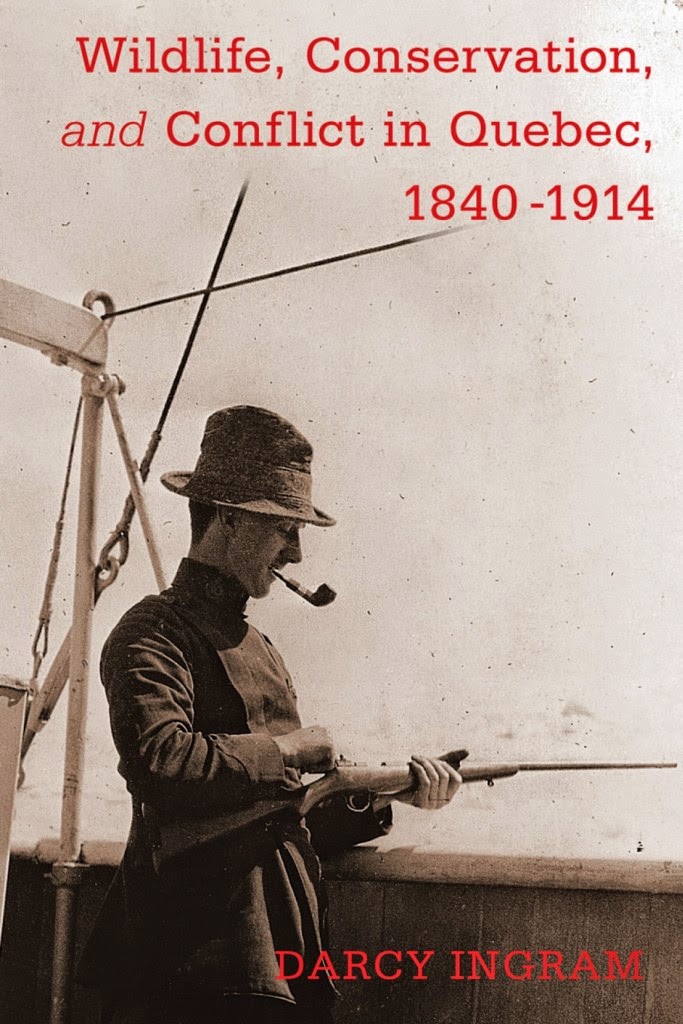 Ingram locates the origins of wildlife conservation in Quebec among an elite group of British and British American men whose social and political outlooks were informed by conservative, patrician values. These values, Ingram argues, were inherited from British (specifically Scottish) conservation traditions and practices.

In the first part of this book, Ingram examines the patrician outlook that drove the development of a unique system of private hunting and fishing leases that partially emulated aristocratic estates in Scotland. Interestingly, Ingram reveals that Quebec’s elite patricians did not seek to establish an exclusive monopoly over fish and wildlife resources solely for the purposes of sport. Instead, their outlook on wildlife incorporated a desire to improve environmental conditions so as to foster wildlife for a range of uses, including subsistence. They were also relatively sensitive to continued Aboriginal use of wild animals. Conservation under this model would be achieved through the private interests and leadership of Quebec’s anglophone elite. In the 1840s, prominent British and British American elites organized local conservation societies and associations in Montreal and Quebec that then lobbied the colonial legislature to establish leasing privileges to promote the conservation of fish and other wildlife resources. The subsequent leasehold system resulted in a series of private estates held by some of the most politically powerful elites in Quebec, including an exclusive lease reserved for Canada’s governors general.

Hunting and consuming wildlife then was a long-standing tradition and vital element of household economies in Quebec. The consolidation of prior hunting and fishing regulations in the 1858 Lower Canada Game Act embodied the values (and anxieties) of Quebec’s elite patricians who sought to exert their social status to oversee the protection and improvement of these important wildlife resources.

Beginning with the regulation of salmon fishing in the 1850s, the colonial government established a system of leasehold tenure on several rivers throughout Quebec. The government sold these “estate-like private holdings” to elite members of the colony’s capitalist classes on the condition that they uphold and enforce Quebec’s fish and wildlife conservation rules (p. 62). This system required leaseholders to hire fish and game wardens, construct infrastructure to support surveillance, and bring charges against any violators of conservation laws. According to Ingram, this “public-private partnership” would be the model of conservation policy in Quebec until the 1970s.

While the model fit with many of the goals and objectives of Quebec’s mid-nineteenth-century elite patricians, it was not an effective means of enforcing conservation law. Ingram ably demonstrates the pervasive resistance to conservation law in Quebec throughout the period from the 1850s to the 1880s. Wildlife resources remained central to household economies and the leasehold system simply could not offer anything close to omnipresent surveillance. Conservation law may have attempted to marginalize previously legitimate uses of wildlife in Quebec, but the limits of enforcement meant that hunting and fishing continued to be part of everyday self-provisioning practices among ordinary rural people in the province.

This second period of conservation policy in Quebec similarly led to conflict with rural inhabitants and Aboriginal people who continued to utilize wildlife for commercial and subsistence purposes. However, the middle-class urban sportsmen of this period were less inclined to be sympathetic toward such uses of wildlife. Ingram also identifies another disaffected faction in the wildlife debate, ordinary sportsmen who were excluded from the elite clubs and associations that held most of the private leases. They found sympathy among their compatriots outside of Quebec who viewed the private leasehold system as undemocratic and elitist. As jurisdictions outside of Quebec developed public wildlife reserves, national parks, and regional parks, the province eventually found itself isolated in the continental conservation movement of the late nineteenth and early twentieth centuries. Quebec was set apart and would remain so for most of the twentieth century until the Parti Quebecois, a nationalist separatist government, eliminated the leasehold system in 1977.