The American Right and environmental politics 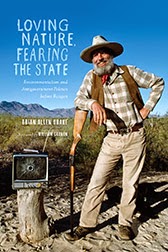 Two contributions distinguish this book. First, it considers how conservatives of many stripes—from traditionalists to libertarians—both reacted and contributed to environmental discourse in the 1960s, 1970s, and 1980s. Second, in asking these questions, it accomplishes something that few other histories of modern environmentalism have: it considers how environmental reformers have engaged fundamental questions of American political philosophy, such as “ideas about the individual, government, and the proper relationship between the two.” As Drake explains, these are “classic questions of American political philosophy” (p. 7).

In considering these issues, Drake offers fascinating rereadings of a familiar cast of characters, from Henry David Thoreau to Ronald Reagan. But the book focuses on four well-researched and compellingly narrated case studies: Barry Goldwater's deep love of the western wild lands and his punctuated political support for environmental reform; Edward Abbey's libertarian commitment to wilderness as a necessary refuge from the modern state and capitalist economy; conservative anti-fluoridation activists' opposition to the role of the state in polluting people's bodies in the name of public health; and a free-market approach to environmental reform grounded in the market, property rights, and tort law spearheaded by groups such as the Property and Environment Resource Center. What the protagonists in all of these case studies shared were suspicions of the role of the state in public life and an abiding concern for the environment and the natural world.

It is those concerns that defined Barry Goldwater's conflicted engagement with modern environmentalism. Drake explains how the standard-bearer of 1960s conservatism got his political start as an outdoorsman and nature photographer, traveling Arizona to share his passion for the Colorado River and the state's wild landscapes. Although Goldwater supported federal reclamation projects and opposed the Wilderness Act in the 1960s, Drake carefully tracks Goldwater's growing concerns for the environment in the 1970s, including issues such as pollution, overpopulation, and ecological decline. Despite Goldwater's commitment to the market economy and respect for individual liberty, Drake explains how he embraced federal environmental regulations in the early 1970s, as Goldwater emerged as a champion, although more often in words than deed, of pollution measures and wilderness protection. Goldwater could never fully reconcile his concerns for the environment and other political and economic imperatives, however. In Drake's analysis, it was for that reason that he had much in common not only with other conservatives, but also with many Americans, who often seemed conflicted over their environmental worries.