An environmental history of the Colorado River

The stream of work on the history of legal battles over the Colorado River continues to pour forth. The latest American Historical Review has a review by Jeff Crane of April Summitt's Contested Waters: An Environmental History of the Colorado River (University Press of Colorado, 2013). Crane writes:


The author notes... the role of Turnerian ideology in the early development of water distribution schemes in the American West. Unfortunately, John Wesley Powell's recommendation for a practical water management system was ignored. Instead, the legal principle of prior appropriation and the requirement, based on laws originating from early statutes in mining districts, that water be immediately used rather than hoarded have bedeviled water management efforts throughout the West ever since. Meant to preclude individuals from controlling water resources, these laws triggered a century-long scramble to gain access to and control the precious resource in amounts far beyond what the Colorado River actually produces. 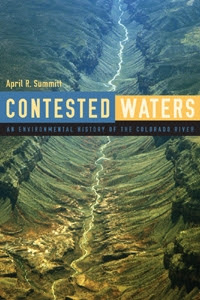 examines the poor treatment of Native American groups in water distribution agreements and their largely successful recent efforts to gain more water. Finally, Summitt looks at the historical treaty agreement with Mexico to provide water from the Colorado and the ongoing neglect of this obligation by the U.S. government. The book ends with an excellent chapter exploring efforts to swap, bank, and privatize southwestern water.

Less critical than Donald Worster's Rivers of Empire: Water, Aridity, and the Growth of the American West (1985), Summitt's book does not explore water as a tool of control or explain the various stages of hydraulic societies. Also, the author gives scant attention to the role of corporate agricultural interests in undermining and weakening federal irrigation programs designed to benefit working-class farmers. Like historian Donald Pisani, she elucidates the ways in which water law, irrigation projects, and distribution gave various southwestern Native communities short shrift. Summitt follows the story through to the late twentieth century, showing the means employed by various Indian nations to secure “wet water” instead of “paper water.” The discussion of largely successful Native efforts to turn promises into flowing water through lawsuits and court decisions, with a string of victories in the 1990s and early 2000s, is well written and useful.