As H-Environment is re-posting all their old roundtable reviews, we'll be noting some of them here. Today I'd like to note the rich and fascinating discussion of Thomas Robertson's The Malthusian Moment: Global Population Growth and the Birth of American Environmentalism (Rutgers UP, 2012). Said "moment", with its concerns about finite resources insufficient to support a growing world population, supplied at least some of the intellectual background to the new American environmental legislation of the 1960s and '70s, and included classics such as Garrett Hardin's "Tragedy of the Commons".

An example of the interesting roundtable commentary, here from Saul Halfon: 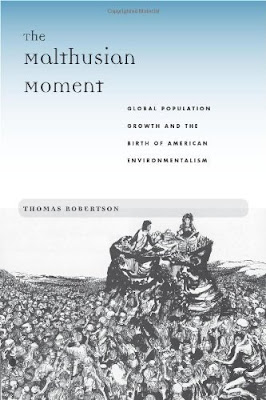 ...modern Malthusianism, often referred to as neo-Malthusianism, is not synonymous with Malthus’s original theory, which was focused more narrowly on food and England, and bound tightly to an existing theory of class. Malthus also understood birth control as a moral vice and as a detriment to capital and so preferred the inevitability of population boom and bust among the lower classes (Perelman 1979). Neo-Malthusians by contrast are a decidedly interventionist bunch, particularly when it comes to reproduction, and they conceptualize natural limits in a much expanded way. Nevertheless, this position remains associated with Malthus because of its continued focus on natural limits in relation to geometric population growth.

Thus, in the age of ascendant liberalism throughout the post-war period, the traditionally conservative Malthusian position took on the mantle of interventionist, progressive radicalism, challenging the very premise of growth and progress by appealing to a naturalistic argument about limits. This position appeared at first to align well with post-Marxist interventionism which was similarly challenging liberal and capitalist growth models. The progressive branches of both movements supported greater social equality, particularly for women. The weak coalition between these two sets of actors, however, was fractured by concerns over coercion, immigration, and racism as the post-Marxist focus on social justice and distribution of wealth encountered the non-negotiability of a neo-Malthusian emphasis on natural limits. From this macro-political frame, Robertson’s story sheds new light on how the focus on limits managed to gain a foothold in the otherwise solidly liberal progressivism of post-war America, laying part of the groundwork for modern environmentalism, and how liberalism was ultimately reasserted.