The latest number of Environment and History has an article by Shane Ewen, "Sheffield's Great Flood of 1864: Engineering Failure and the Municipalisation of Water". The abstract: 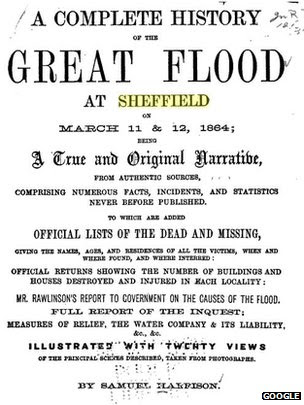 Recent scholarly research at the intersection of the histories of technology and the built environment has revealed many tensions surrounding the design, building and management of major socio-technologies like urban waterworks. There remains much scope for research into the interdependence of socio-technological systems, engineering knowledge and the political and commercial agendas of municipal governments and private water suppliers respectively. In particular, the short- and long-term impact of reservoir disasters - examined in detail here through the case of Sheffield's 'great flood' of March 1864, in which over 250 people lost their lives - on the ownership and control of urban waterworks reveals many conflicts within the engineering profession, as well as the urban community itself, about the causes and consequences of socio-technological failure in the mid-nineteenth century. Using a rich variety of municipal, legal and commercial archival records, as well as contemporary newspapers, this article examines the competing interests involved in negotiating the long-term municipalisation of water supplies and concludes that greater attention should be paid to the influence of man-made disasters and engineering actors in this political game.