Climate in the American legal academy

A recent post by Dan Farber at Legal Planet discussed the issue of when climate awareness began to enter American law.

In "The Origins of Climate Awareness in the Legal Academy", Farber writes:

The earliest clear references to climate change that turned up in my search... were in 1978 articles about nuclear energy. The most notable was by an administrative law professor at Harvard, one Stephen Breyer. Now-Justice Breyer argued that it was misleading to consider the environmental impact of nuclear power without also considering the impact of alternatives such as coal. In particular, he said, “reliance upon coal, on the other hand, could aggravate the ‘greenhouse effect,’ whereby excess carbon dioxide (which accompanies coal burning) traps heat inside the earth’s atmosphere, thus possibly melting the icecaps and raising the level of the oceans.” He apparently viewed this as a speculative concern, however, since he immediately added that coal “more realistically” could cause harm to coal miners and other health effects. The other article about nuclear power also observed in passing that “coal combustion may disrupt global weather patterns by increasing the amount of carbon dioxide in the atmosphere, creating a ‘greenhouse effect.’”

In another article, Herbert Taubenfeld recounted that:

A 1981 article by Edith Brown Weiss provided the most thorough (as well as thoughtful) treatment of the climate change issue.... Given the higher level of scientific uncertainty forty years ago, Brown called for consideration of a series of measures, including requiring environmental impact statements to include CO2 emissions, removal of CO2 from smokestacks, and limits on the use of coal. She also called for international consultations and for strategies to deal with deforestation.  Given the uncertainties, however, she said that the issue “should not be pushed into high-level political debates that would cause countries to adopt premature positions based on inconclusive premises and embedded in national political rhetoric.”

I suspect that there were several reasons why legal academics failed to focus more on climate change in this early period. First, the problem was more remote forty years ago than it is today. There was also much more scientific uncertainty about the magnitude of warming and its impacts than there is today. Second, there weren’t any legal developments to talk about, with the first UN treaty 7-10 years in the future. Third, there was so much else going on in environmental law. For instance, Weiss wrote the year after the Superfund law was passed and barely a decade after the Clean Air Act went into effect.

Whatever the reason, legal scholarship seems in retrospect to have been a bit slow to focus on the issue of climate change.  With a few exceptions, legal academia cannot claim much credit for foreseeing how large the issue would loom in the future (now).

Hartog on property in land and water

Monk's Ditch in the Gwent Levels, Wales, land reclaimed in the Roman period As part of his stint as a guest blogger at Legal Histor... 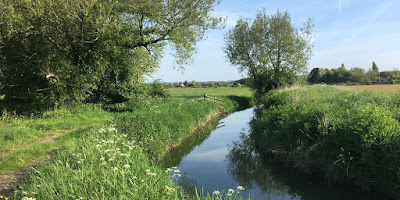