H-Water recently posted a review by Leslie Tomory of Leona Skelton's Tyne after Tyne: An Environmental History of a River's Battle for Protection, 1529-2015 (White Horse Press, 2017). An excerpt from the review: 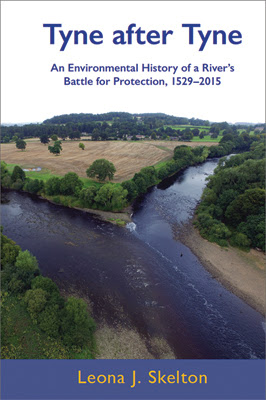 The first two chapters deal with the earlier period from 1529 to the mid-nineteenth century. The history begins when the Crown named the mayor and aldermen of the Newcastle Corporation the conservators of the Tyne and its tributaries via a parliamentary act. The purpose was to preserve the freedom of navigation from encroachment and to prevent silt from blocking the channel. From that time, the river’s conservators considered applications from riparian landowners to do works that could alter the river’s flow, such as the construction of docks. The corporation’s activity in this role was only sporadic to 1613, when new bylaws were passed regulating various activities along the Tyne, such as waste disposal and the construction of wharves. From this point onward, the corporation every year appointed water bailiffs and river jurors to monitor and hear cases of contraventions. These institutions continued to exist until 1835 when municipal reform laws replaced them with a River Committee. Skelton argues that the activity of the Tyne river court can be seen as a form of environmental regulation that prevented the overdevelopment of the river. In doing so, she tries to seek similarities with the environmental regulations that would emerge in the twentieth century, while recognizing that the motivations were to preserve the river for economical motives. While she is correct to point out that modes of environmental preservation existed long before the late nineteenth century, the commonalities with twentieth-century movements, which she mentions in a number of places, seem overdrawn.

The next chapters describe the Tyne Improvement Commission (TIC) activities from 1850 to 1968. The commission was created by Parliament with a mandate to foster the river’s economic utility. This commission’s principal interest was above all on the trade that flowed down the river. As in the earlier period, this included keeping its central channel deep and free-flowing for ship traffic. It developed a degree of expertise by employing a well-paid engineer to report on proposed works along the river, as well as waste disposed into it. The TIC was concerned with waste discharged into the river but only because it could be a barrier to navigation. This narrow interest meant that almost all applications for docks, sewers, and other structures along the river were approved. Whatever interest there was in preserving nature, on an institutional basis at least, was found in the Tyne Salmon Conservancy (TSC). It was founded in 1866 in the wake of Royal Commissions on salmon conservancy and was given the mandate to protect the fish in the river. Skelton argues that the TSC and its successors built up knowledge of the state of the fish in the Tyne (and other rivers in the area) that, while not producing immediate results, nevertheless proved valuable for environmental protection in the long term, especially after the 1950s. For example, scientific studies from the 1920s and 1930s explored water quality and fish species. The TSC made a concerted effort in these years to motivate a cleanup of the river as it became ever more polluted with effluent. Efforts to get the funding necessary for this from the central government, however, failed so that by 1940s, the Tyne was in worse shape than ever before. The 1950s were little better in this regard. The slow recovery from the Second World War and its accompanying austerity offered little scope for spending on environmental protection, even as local campaigns tried to bring attention to the problem. Untreated sewage continued to flow into the river. Finally, in the 1960s the situation began to change. Two new bodies were created to conserve watercourses in the area and to build sewer systems to spare the rivers. The Tyneside Joint Sewerage Committee organized the funding for a new sewer system, with construction beginning in 1972.